Why Faux Meat Can Be Perfect for Meat Eaters

Fake meat gets a lot of criticism from meat eaters and vegans alike. I hear it all the time - "If you're going to eat meat, eat meat" - or - "If you don't eat meat, why eat fake meat?" Aside from the animal and environmental issues, (which I'm not going to go into, because they aren't in any way positive), I've discovered a whole other reason for cooking with faux meat. It makes my dad happy.

Every so often I spend a block of time with my dad at his house in San Jose, the house I grew up in, where he still lives, by himself, at the tender age of eighty-five. When I'm there, I cook for him, which is a pretty daunting task. Not only am I in Mom's kitchen, where a pretty high culinary standard was set many years ago - I'm cooking for Dad, who was a very enthusiastic hunter when my sisters and I were growing up. I remember a lot of family weekends with all of us sitting in freezing, muddy rice fields waiting for ducks to fly over. The man likes his meat, and even though I'm thoroughly opposed to cooking it for him, I'm also opposed to denying him anything I can possibly do for him at this point in his life. After all, he's been there for me for over 57 years.

On my most recent visit, I decided to take a chance and fix up some really simple, familiar dishes for him, but using fake meat. I wasn't really trying to trick him, but I'll admit I didn't say anything until he asked about it. Surely he must have guessed that since I was eating the same thing he was eating, something was up, but he played along. Dad is a good sport, and he likes good food, which is what I gave him.

I started out by making a simple pasta dish with mushrooms, spinach, and Beyond Meat Beefy Crumbles stirred into the sauce. He ate, he enjoyed, he didn't ask. When I heated up some of the leftovers for lunch the next day, he finally commented, "There sure is a lot of meat in here. Is it real?"  I told him the truth. He nodded, scooped up another bite, and said, "This is really good." Score one for Team Kim! 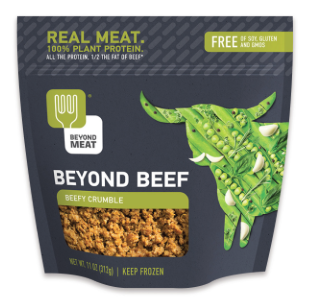 Next I made a veggie stir fry with brown rice, orange sauce, and Gardein Beefless Tips. They looked like real chunks of meat to me, so I knew I was on the right track. This dinner was a huge hit,  and when Dad speared a bite of "beef" and held it up to me, again asking, "Is it real?," I didn't hesitate to tell him what he was eating. His comment was, "It tastes really good... and it's so tender..." 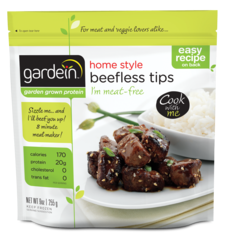 That's where it all fell into place for me. Not only did he like it, it's healthy for his heart, and he can chew it. Tough, gnarly food no longer works for him, and the good quality fake meat I served made him happy because he could actually have his meat and chew it too. This makes me so, so happy.

From here on, when someone wants to engage in the faux meat debate, I'll have my response ready. It's good for the animals, good for the environment, good for our health, and, most importantly, it makes my dad happy. Any argument that needs to go on beyond that can just go on without me.