We enjoyed another marvelous meal at Portobello recently, with Rick's brother and his wife, who were down from Seattle and in the mood to celebrate our return to the northwest. Portobello is the perfect all-vegan place to celebrate anything at all, or to simply have some of the best food Portland has to offer. It's casual-fancy, not snooty-fancy, so feel free to wander in in jeans, or dress to impress your date. The staff is friendly without being perky or overly present, the atmosphere is relaxed and calm, and the food is famous far beyond the boundaries of Portland. They also offer a nice selection of wines, beers, and local organic spirits. I plan to eat there as often as possible, and to try absolutely  everything.

Today I'm starting Throwback Thursdays here on PV. It's a fun way of reminding you (and me) of some of my earlier posts and recipes without having to scroll back through years of pages. From 2011, I re-bring you the wonderful Zucchini Noodles with Peanut Sauce. The noodles themselves are made out of zucchini, so if you're doing the gluten free thing, you'll be in noodle heaven here. And peanut sauce has to be one of the best things on earth, and probably beyond. If you're allergic to peanuts, substitute any kind of nut butter you like. Enjoy! 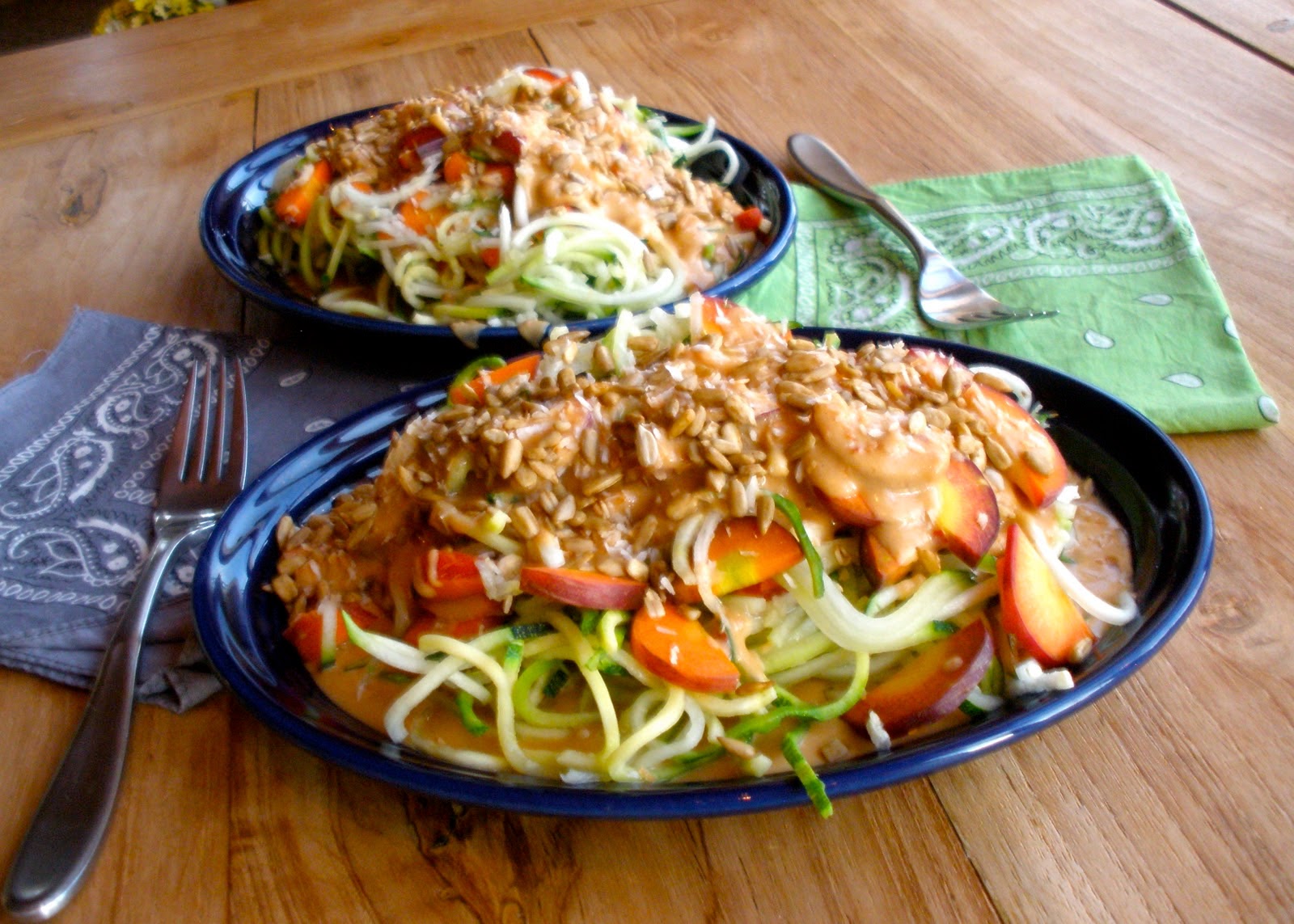 I used to make pesto by the bucketful back in our Honeymoon Pizza days, and I still love having a table piled high with beautiful fresh basil (and a few other treats too). As farmer's market season kicks into gear, it's great to have an easy vegan pesto recipe waiting for you to just bring home the basil! 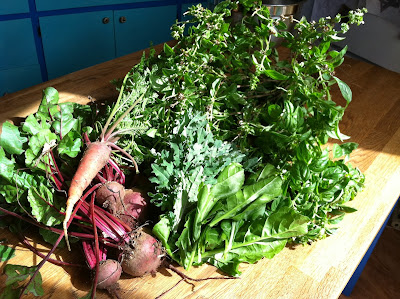 Place the garlic in the food processor first, and chop it for a few seconds all by itself.
Add 1/2 the basil, and the olives, yeast, salt, and lemon juice.
Pulse to blend a little at a time, adding the remaining basil as you go.
Add the walnuts last and pulse a few more times. Don't over-blend pesto or it will go from vibrant green to icky khaki color. 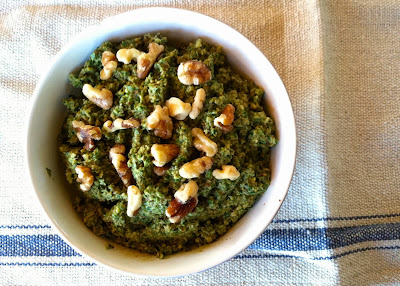 Use basil as a spread on bread or sandwiches, as a pizza sauce (or dolloped on as a topping), or as a pasta sauce. Store tightly covered, with a thin coating of olive oil on top to keep the air from getting in and changing the color.

Like this recipe? There are over 100 more in the Recipe Box!

Laughing Planet is quickly becoming another of our favorite Portland food haunts. This casual eatery is not all-vegan, but vegan and GF items are clearly marked on the menu, which offers bowls, burritos, soups, salads, smoothies, and even beer. We love beer! There are several locations in Portland to choose from, as well as two in Eugene and one in Corvallis. (We're in Oregon now - did you catch that?)

Menu samplings from recent meals at the NW 21st Ave location include the Thai Bowl, Soylent Green Bowl, and the Che Guevara Burrito. All were fabulous, and all repeatable. In fact Rick had the Thai Bowl the other night, and again for lunch a few days later, subbing baby asparagus for the broccoli that's usually included. Gotta get asparagus while you can, right? Veggies have been consistently cooked-just-right, sauces are so good I can't choose favorites, so always ask for a little of each, and portions are generous. Walk in hungry, walk out happy.

And maybe best of all, there just happens to be a Laughing Planet in the very building that we moved into over the weekend. Talk about a great perk! Woo! Lucky us!
Posted by Kim Miles at 8:19 AM 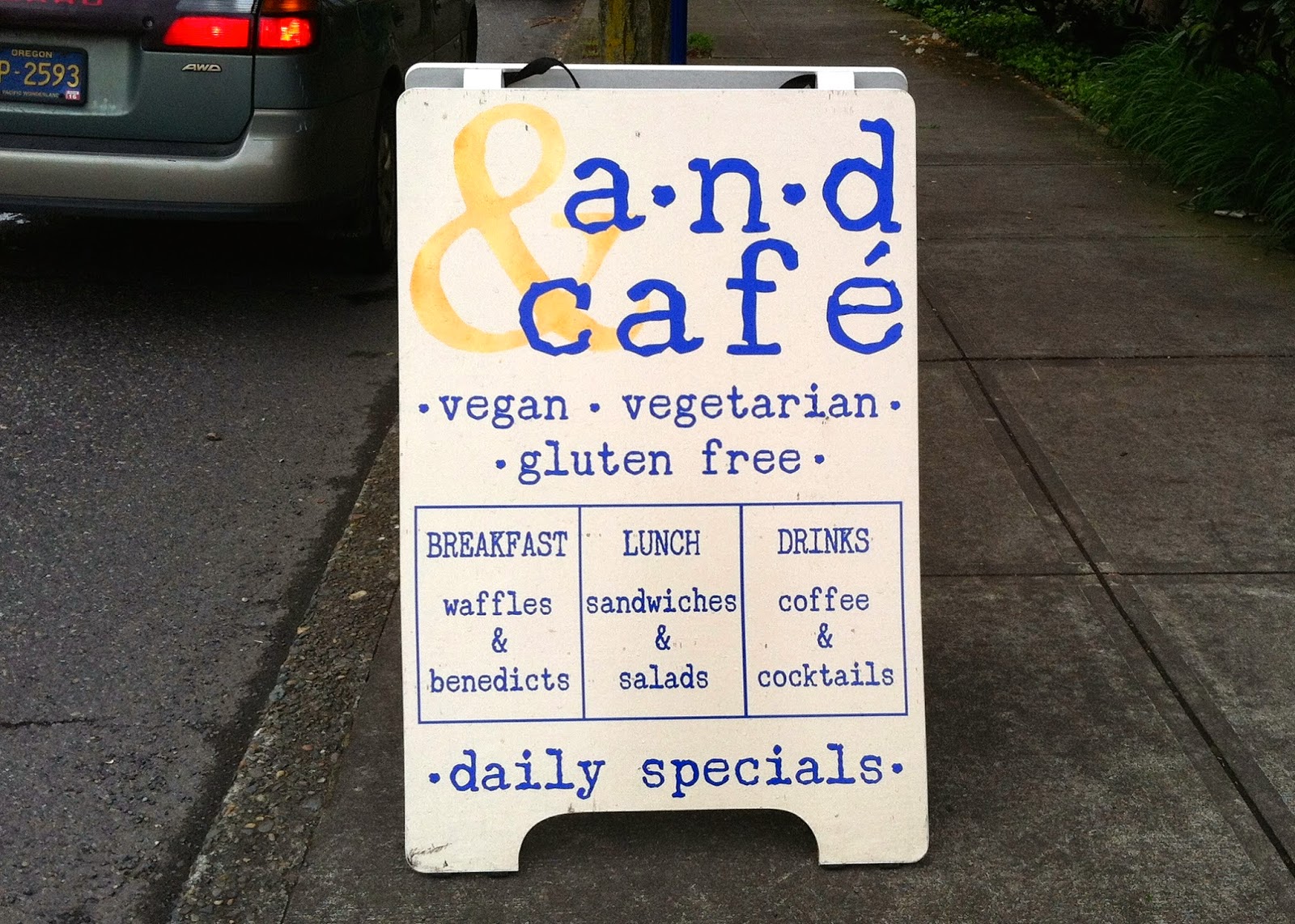 Our search for a real breakfast, beyond the Road Trip Smoothie, took us over to the other side of the river to A.N.D. Cafe. I don't have the whole story yet, but it's pronounced "A.N.D." rather than "And." I think it's more like "A and D," as in two people who started the place, and I can't explain why things like this matter so much to me. I'll ask more questions next time, and there will be a next time. This popular little vegan, vegetarian, gluten-free restaurant is not in our neighborhood, but it's well worth the short drive. 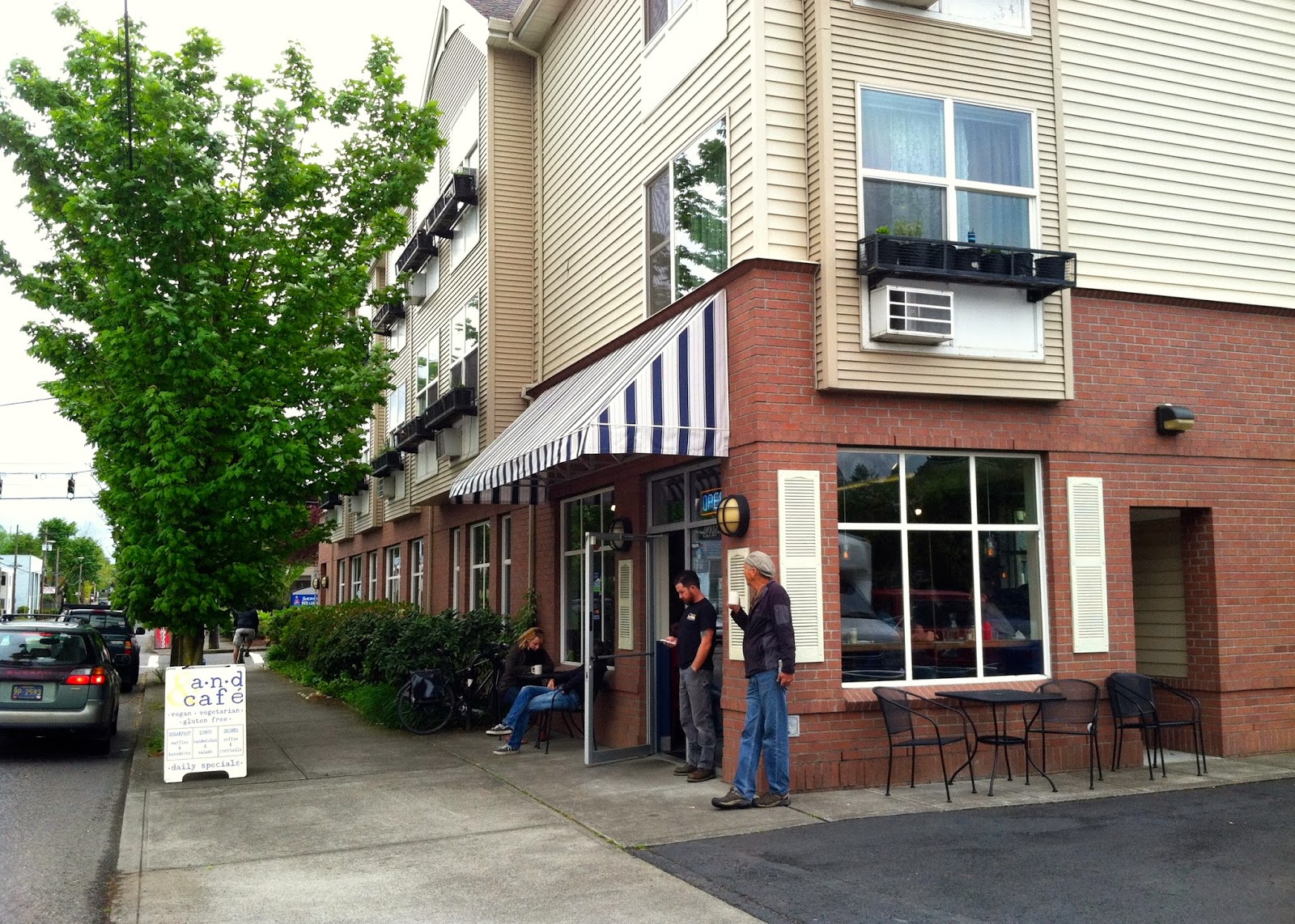 Let's get right to the food! It was hard to choose from their wonderfully creative menu, but we both decided to go outside our usual breakfast-favorite-zones. In fact, both items we chose were brand new on the menu, and a far reach from our usual breakfast burrito and scramble faves. Rick had the Nuevos Rancheros - non-GMO corn tortillas filled with scrambled tofu and vegan cheese, and topped with a zippy but not too spicy green sauce and vegan sour cream. I stole several bites.
Totally out of character for me, I went for the Mushroom Melt Waffle, which was stuffed with mushrooms and vegan cheese, topped with scrambled tofu, and drizzled with a spicy ranch sauce. The waffle itself was thick and light and fabulous. The combination of flavors was plate-scraping good. I only shared a little.

And then, because we're on a Sacred Mission to find as much great vegan food as we can, and share it with you (even though we get to eat it all), we took a piece of house-made vegan Cashew Cheesecake home to have later. I recommend you do the same. Oh heavenly cheesecake, how I love you.

We have a lot of places to try, but I think we'll go back for a followup at A.N.D Cafe soon. If you're in Portland and want to meet there, let me know. We can share bites.

Veggie Grill to the Rescue

It's exciting being in a new town with so many vegan delights just waiting for us to find them. Part of the reason we decided to give Portland a try is because it's so famously vegan friendly. Little by little we'll make our way to as many vegan and veg friendly restaurants, food carts, bars, bakeries, and cafes as we can find. And yes, I'll tell you all about them!

While I'm so excited to have so much exploring to do, I'm also equally relieved to have one simple, reliable comfort food place to go to during this weird transition phase when we're living in a hotel, looking for an apartment, and don't have a kitchen of our own. Thank the Great Whobody for Veggie Grill on 5th and Taylor, for being there for us almost every day so far. I've raved about it before, and I'm sure I'll do it again, because I'm just so darn happy that this totally vegan chain of restaurants is alive and well in the world.

We've been going for everything from cheeseburgers to kale salads this week, and I love it all. And although it's a very casual, almost fast food sort of atmosphere, it's clean and happy and hiply decorated, and you can get wine or beer with your meal. The people who work there are friendly, though not necessarily vegan. That's a good thing because my guess is that the customer base is also not mostly vegan. I like that VG feels welcoming to anyone who's just hungry for something easy and good to eat. 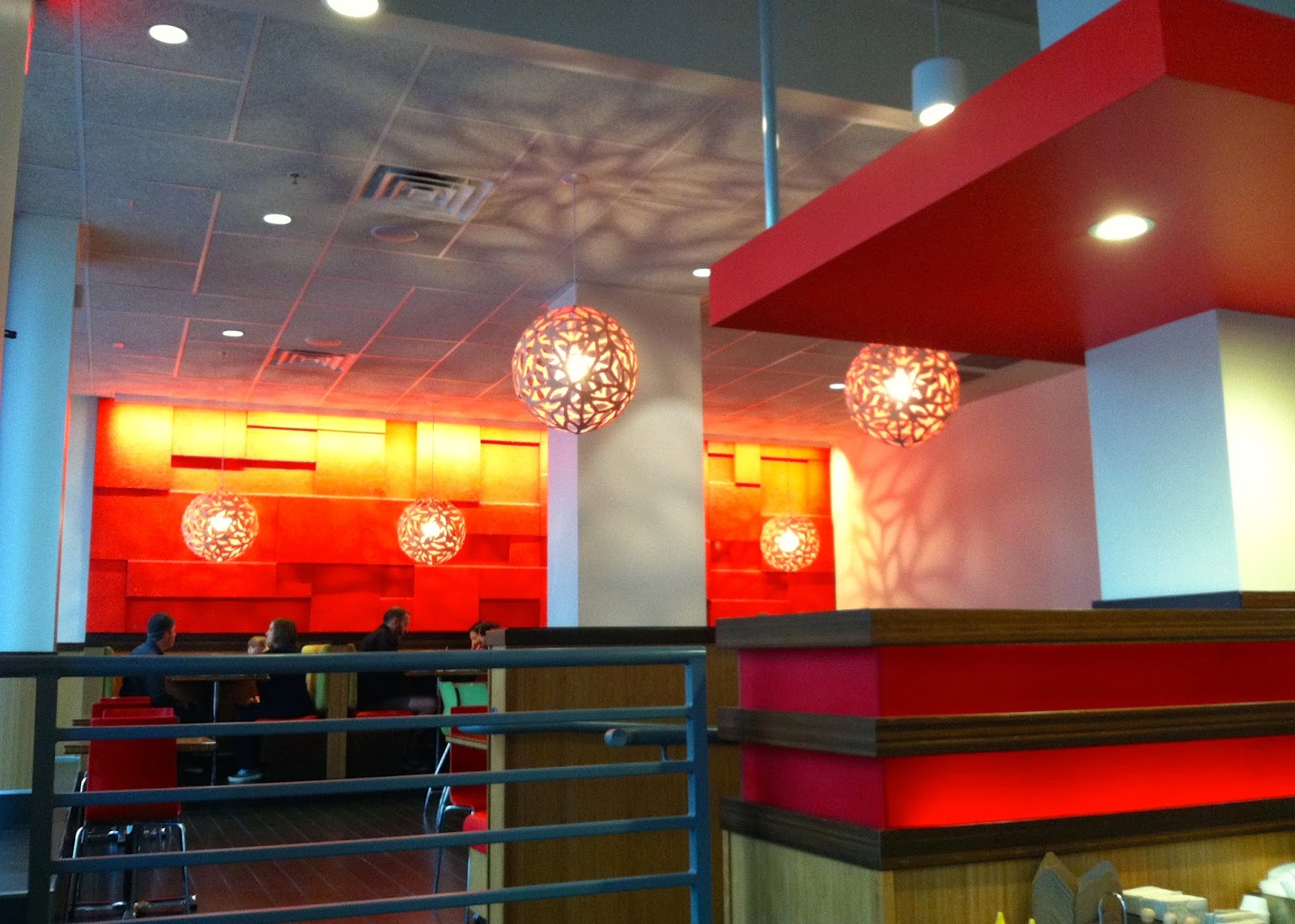 Find a Veggie Grill near you by following this link, and be sure to get their free app for your phone so you can collect points with every purchase and get free stuff! I get something free almost every time I go in. Sweet. Actually, do me a favor. If you want the app, send me an email. If I invite you, I get extra points too! 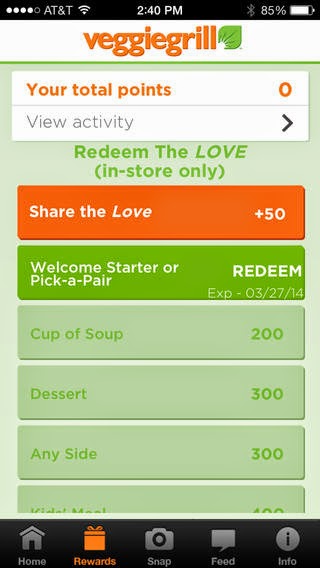 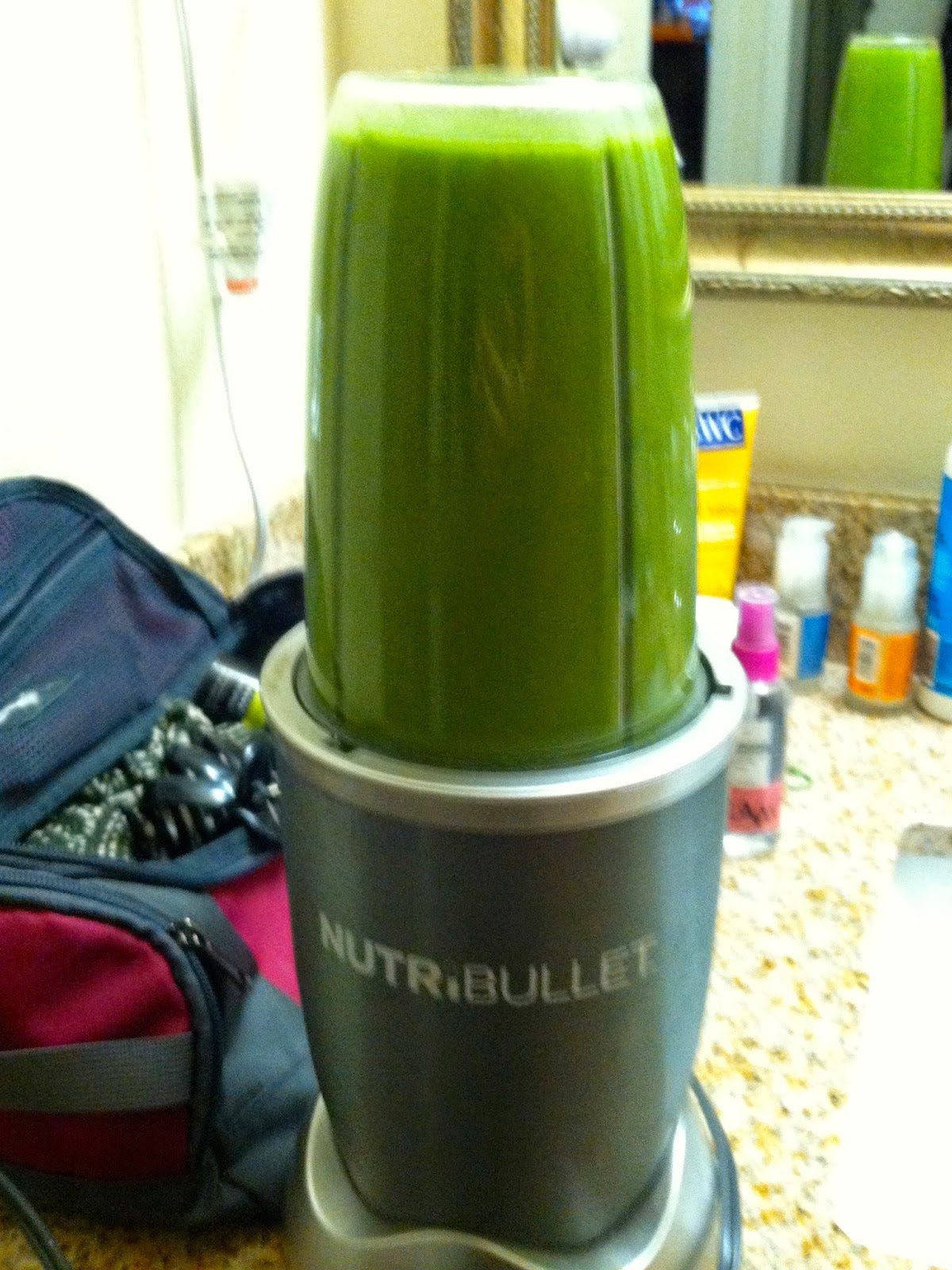 Traveling makes eating well a challenge for anyone, and even more so for vegans. Sure, Fritos and Oreos are vegan, but we don't really want to live on them... right? We always take a cooler filled with good things to munch on along the way, and the most important component is our morning smoothie. It's the easiest way to be sure we get a nice hit of greens and other fresh goodness without having to do a lot of prep. The Road Trip Smoothie has only 6 ingredients at the most, and is easily whipped up in a Nutribullet or other small travel blender. 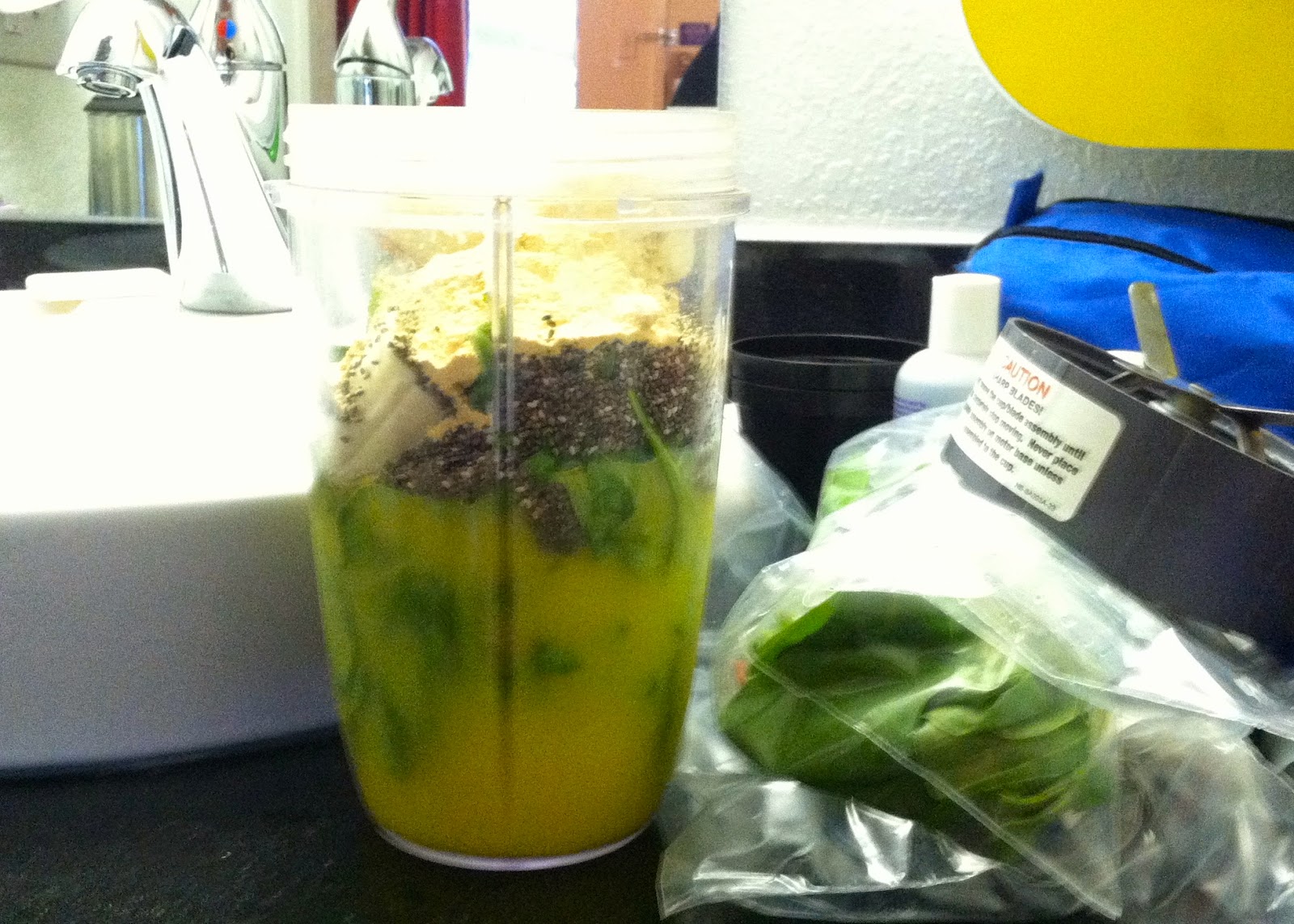 Place everything in the blender and blend well for a minute or so. If you don't have chia, maca, or ice, no worries. It's good with just the fresh stuff. This is a great way to start your day, especially when you're traveling. It makes up for a lot of the weird road food we sometimes get stuck with when we don't have a full kitchen of our own. Cheers to you! 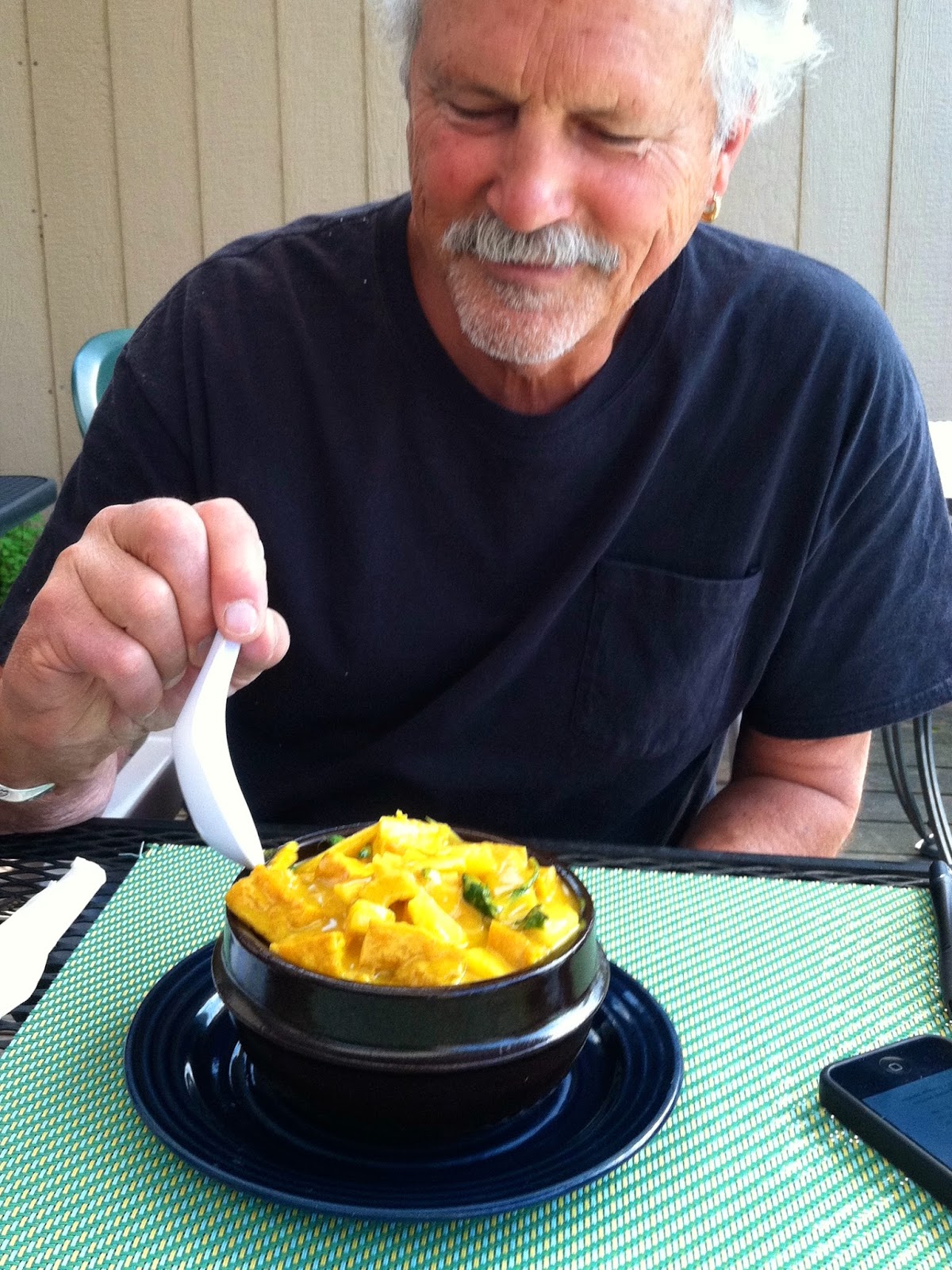 One of the many reasons Rick and I decided to "date" Portland for a while is because it's such a wonderfully vegan-friendly city. We've only been here a few days, and we're still staying in a hotel, which means we have to eat out most of the time. Our favorite go-to comfort restaurant is Veggie Grill, and I expect we'll be found there quite often. But yesterday we were near the convention center looking for lunch, and fortunately had friends to recommend a little spot nearby that they had recently tried. Pho Green Papaya is the kind of inconspicuous place we might drive right by unless we knew better. I'm so glad we took our friends' advice and stopped in. 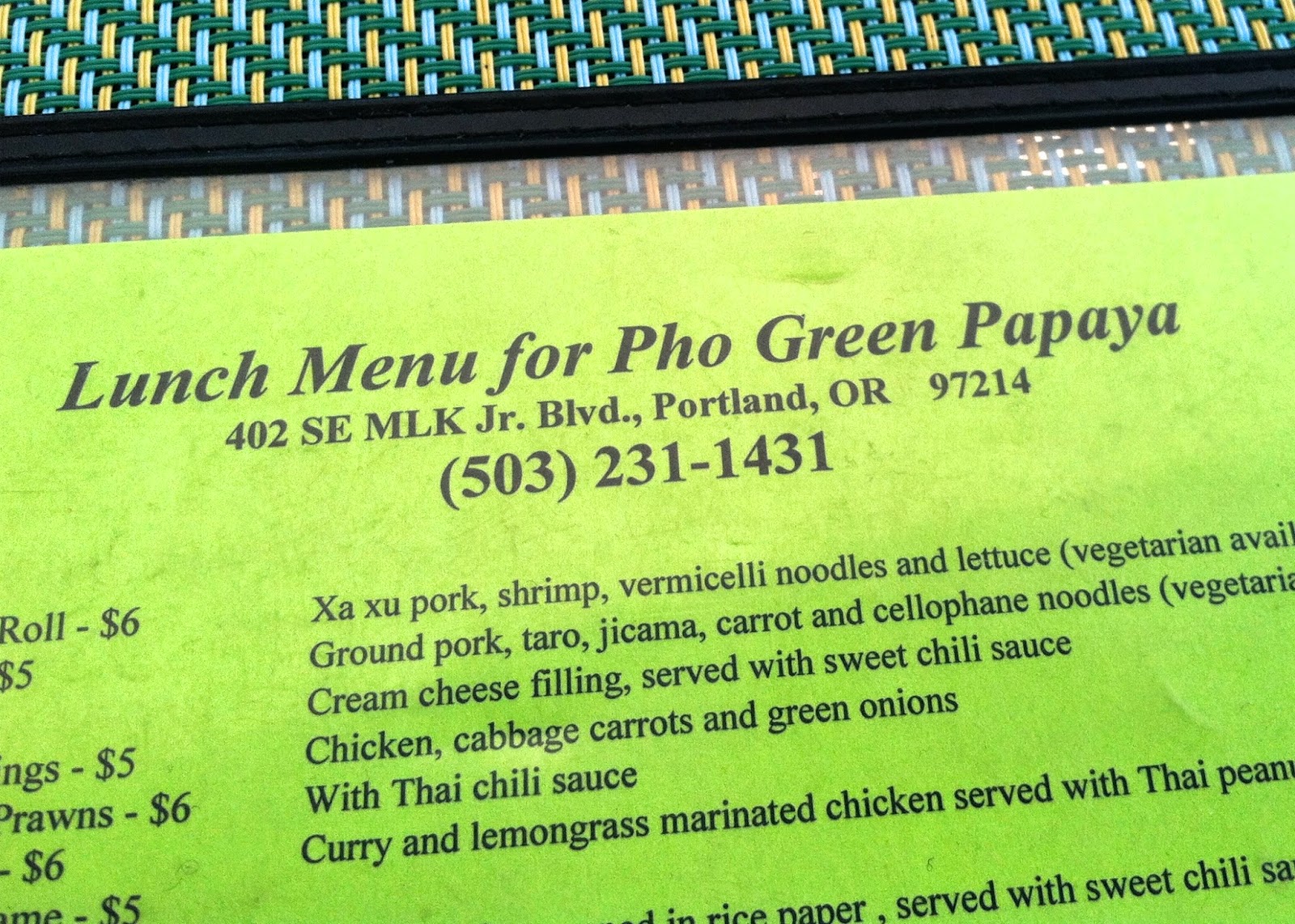 Obviously, it's not an all-vegan restaurant. There is, however, a nicely varied vegan section on the menu. There were several things we wanted to try, but we narrowed it down to two lunch dishes - the Tofu Udon Curry Noodle Soup, and the Vietnamese Jade Noodles. Both were fantastic. The curry was rich and coconutty and a little on the sweet side, with those nice fat udon noodles and lots of tofu and vegetables. The Jade Noodles were my favorite, and I hoarded that plate loaded with a nice balance of noodles and crunchy bean sprouts, red bell peppers, tofu, and a simply wonderful savory sauce. 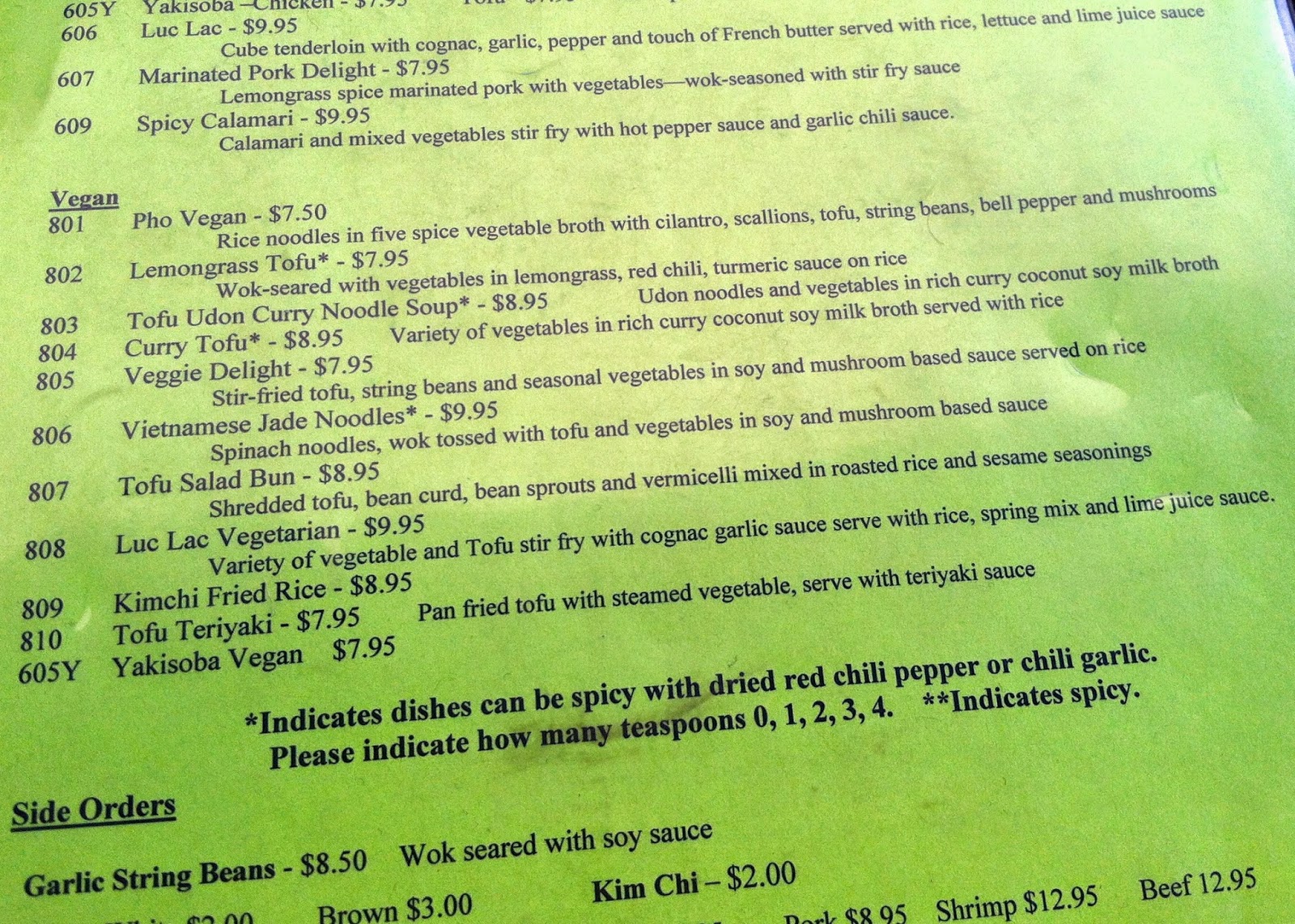 We enjoyed our lunch on a sunny day, outside on the covered deck, where they're also prepared for more typical northwest weather with heaters and a roll-down wall. As we finished up, we knew we'd be going back soon to try some of the other offerings. This could easily become a favorite. At this point, I'm not in a really big hurry to find a kitchen of my own.
Posted by Kim Miles at 9:49 AM