I love, love, love Mu Shu Veggies with Hoisin Sauce and those amazing little Mandarin Pancakes. Did I say love? I meant LOVE. But even so, I don't make them very often because the pancakes are a little more work than I want to put into a casual dinner. I'm not lazy, but I do look for shortcuts where I can find them.

Enter the miraculous tortilla, flatbread gift from the goddess of simple kitchen goodness. Sure, you could make your own tortillas, and they would be amazing, but then you might as well make the pancakes, right? The point of all this is to keep it as simple as we can. So pick up a package of nice soft flour tortillas - any kind you like - and fondly refer to them as pancakes.

To make this little any-day feast, chop up whatever vegetables you like. I used bok choy, carrots, onion, kale, and red bell pepper. Chop chop, done! Set them aside while you make the sauce (see below). Consider making a double batch. It keeps well, and it's great on lots of things, like sandwiches and scrambles and stir-fries.

OK. So you have tortillas, veggies, and sauce. You're ready.

Gently warm your tortillas in the oven, wrapped in foil or a damp dish towel, or wait to heat them individually in a skillet after the veggies are cooked. It sort of depends on how many people you're feeding.

Heat a little oil (I like coconut for this) in a large skillet or wok. Throw in the vegetables and cook them over med-high heat for a few minutes, until they're softened but still crisp and brightly colored. No mushy Mu Shu!

Throw in a little bit of sauce, just to coat the vegetables. Turn off the heat.

Now take your tortillas out of the oven, or heat them one at a time in a clean skillet, just until soft.

To assemble, fill your tortillas with veggies, add more sauce, fold in the ends, and roll them up. you can make smaller, thinner rolls that can be cut in half and hand-held to eat, or great big fatties to serve up burrito style and eat with a fork. Either way, have some extra sauce to spoon on at the table. The sauce makes the meal! 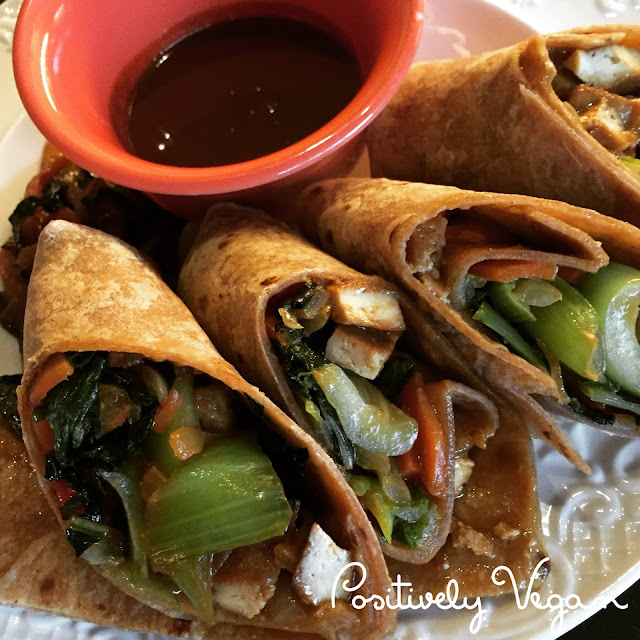 If you like spice, a dash of your favorite hot sauce is a good addition too. And if you look closely, you'll see that I added a little bit of Marinated Baked Tofu to these wraps. It's not necessary, but since I already had some on hand, I used it. Yum!

Here's the sauce recipe, as found in my book, Change Your Sauce, Change Your Life. For more great recipes, pick up your very own copy on Amazon for just $5.99! I appreciate the paycheck!

Whisk all ingredients together, serve immediately, or store in a jar in the refrigerator. The sauce will thicken a little when it's chilled.

Enjoy your dinner! Share with friends! Give them a book to take home! xoxoxo 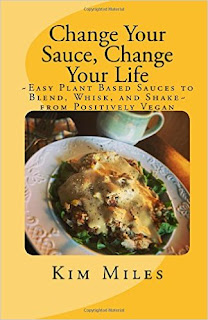 Why I'm Scared of Vegans

Yeah, I said it. I'm scared of other vegans.

When I'm about to put myself in a situation where I'll be meeting and mingling with a bunch of vegans I don't know yet, I always make a big fat thing over wearing the right clothes (no wool, although I refuse to give up my beautiful 30 year old long black wool coat), my shoes (although there is still some residual leather in my closet), and even jewelry (my cultured pearl earrings, which I wear all the time in real life because my sister gave them to me, and because they're simple and fabulous and go with absolutely everything, are not technically vegan because they came from an enslaved oyster). One can take just about anything to extremes.

I'll admit it, I get a little crazy. I even double check my lipstick to be sure it's a well known vegan brand, in case someone should spy me sneaking a touchup. Rick rolls his eyes and laughs at me, but I take this shit seriously. First impressions matter to a Vegan Ambassador. And even though I know I shouldn't, I care.

Let me say that not one fellow vegan has ever judged me to my face. I have no idea what anyone says behind my back, but to my front, I've never gotten more than a suspicious sidelong glance for admitting something like, I care just a teensy bit more about the health of humans than the living conditions of animals. Even though I know it's not a smart thing to say, I can't seem to stop myself from blurting out some such personal confession in the midst of a group of hardcore animal rights activists. I guess I want it to be clear where I stand. In my genuine not-leather boots.

It might be better if I stay home. Or hang out with non-vegans, who in many cases actually turn out to be pre-vegans who haven't found the right inspiration yet. And that is exactly why I need to befriend interesting folks from all sides of the dinner table. The fact is, when people hang out with Rick and me long enough, not only do we form lovely friendships based on a variety of interests, we also tend to have a positive influence on how they look at their food choices.

We stopped trying to convert people a long time ago, after we noticed friendships being damaged rather than enhanced, and beloved faces glaze over rather than light up with interest in our passionately delivered sermons on how dairy hurts our bones and how self professed animal lovers who pamper their pets but still eat meat are not being honest with themselves. Gosh, really? How could that not be enthralling party conversation?

We learned the hard way. And then we thought for a while that we needed to go out and get some vegan friends. After all, they'd get us! And Portland is crawling with vegans, for-dogs-sakes. But much to our surprise, a lot of them don't get us at all. And honestly, it's just too hard to find the right vegans, because it's possible that there aren't very many out there like us.

To be clear, we care deeply about the animals of this planet, and about the planet herself. We would love to see a major shift in the way the western world eats, because we're the ones who actually have the luxury of choice, and the ability to make terrific advances and changes as a result of our choices. We know that everyone, from the animals to the humans to the planet would benefit from a more vegan mainstream, and we're heartened by the progress that's being made.

And here's the thing I never hear anyone else saying - healthy, well-fed vegans tend to be more compassionate toward themselves, each other, animals, and the planet. Healthy people are clearer headed, smarter, and make better decisions. Healthy people make other people look at them and say, I'll have what she's having. That's why I put humans first. We have to take care of us before we can tend to anyone else.

As I said, when people hang out with us, a lot of them eventually begin to change their diets. In a good way. Family members who love to cook exotic fancy stuff are now almost entirely plant-based, and still cooking exotic fancy stuff. A young friend who used to bar-b-que just about every night last summer told me he's going vegan now. For two reasons. He wants to preserve the good health he has before he gets old and has to scramble to reclaim it, and... because he loves cows. Awww. Now that's what we're after.

I don't give a hoot how or why a person goes vegan. The fact that they do, or even mostly do, is huge. Everyone benefits. I also don't make strict use of human labeling. I think it's just too picky, and kind of inappropriate, for a banner waving "animal rights" vegan to dismiss a "health" or "environmental" vegan as merely "plant-based" because they aren't waving a banner, or because they still wear leather shoes.

Get over it, folks. Every step, even the babiest of steps, when it comes to getting people to eat more plants and fewer animals is a valid, important contribution to this whole big thing we're trying to do. We're trying to save the world! We need every little bit of help we can get!

Dear vegans, be nice to each other, be nice to yourselves, and especially be nice to your friends with the steak on the grill. They're paying attention. And we can do a lot more good by just being our awesome, well-fed, generous selves than by stuffing a million vegan pamphlets in our friends faces.

I don't want to be one of the scary vegans. I want to be the one who shares the killer cashew mac n' cheese, who brings vegan cookies to her non-vegan friends, and who even compliments them on their cute leather boots. Who knows - by next year, those friends might be wondering if they can still wear those pre-vegan boots and not eat the cow. I'm the one who's going to tell them yes.
Posted by Kim Miles at 8:17 AM