Going out for breakfast with non-vegans at mainstream restaurants can be a challenge. You peruse an enormous menu, only to realize that nothing listed can be veganized because everything contains eggs or cheese, even if you find something you can leave the meat out of. My most recent solution to the dilemma is to flip straight to the side dishes. Most often I'll find a perfect little "shopping list" of items to mix and match for a satisfying breakfast I can enjoy with my friends without being a big weirdo and picking apart one go the chef's specials. Sometimes it's easier for all concerned to just start from scratch and ask for what we want.

My go-to side dish right now is potatoes. I love potatoes, and many restaurants make wonderful homestyle spuds fried up with onions and seasonings. There's usually a lot of oil too, but I don't go out for breakfast that often, so when I do, I just enjoy my fried taters and don't worry about it.

My favorite combination is potatoes with salsa and avocado. On a recent visit to the San Jose Cafe, where I met up with a childhood friend for a bit of catching up, I was able to get just what I wanted, and even had them throw in some fresh spinach. The result was a comforting plateful of potato love.

I liked it so much, I told the waitress to give the cook a kiss for me. She reported back that he was all grins, and that really made his day. It's good to show appreciation, and good to find easy ways of eating out with friends. I love getting together with my old pals when I visit San Jose. And now I have a new breakfast pal, the humble potato, with all the veggie fixings. 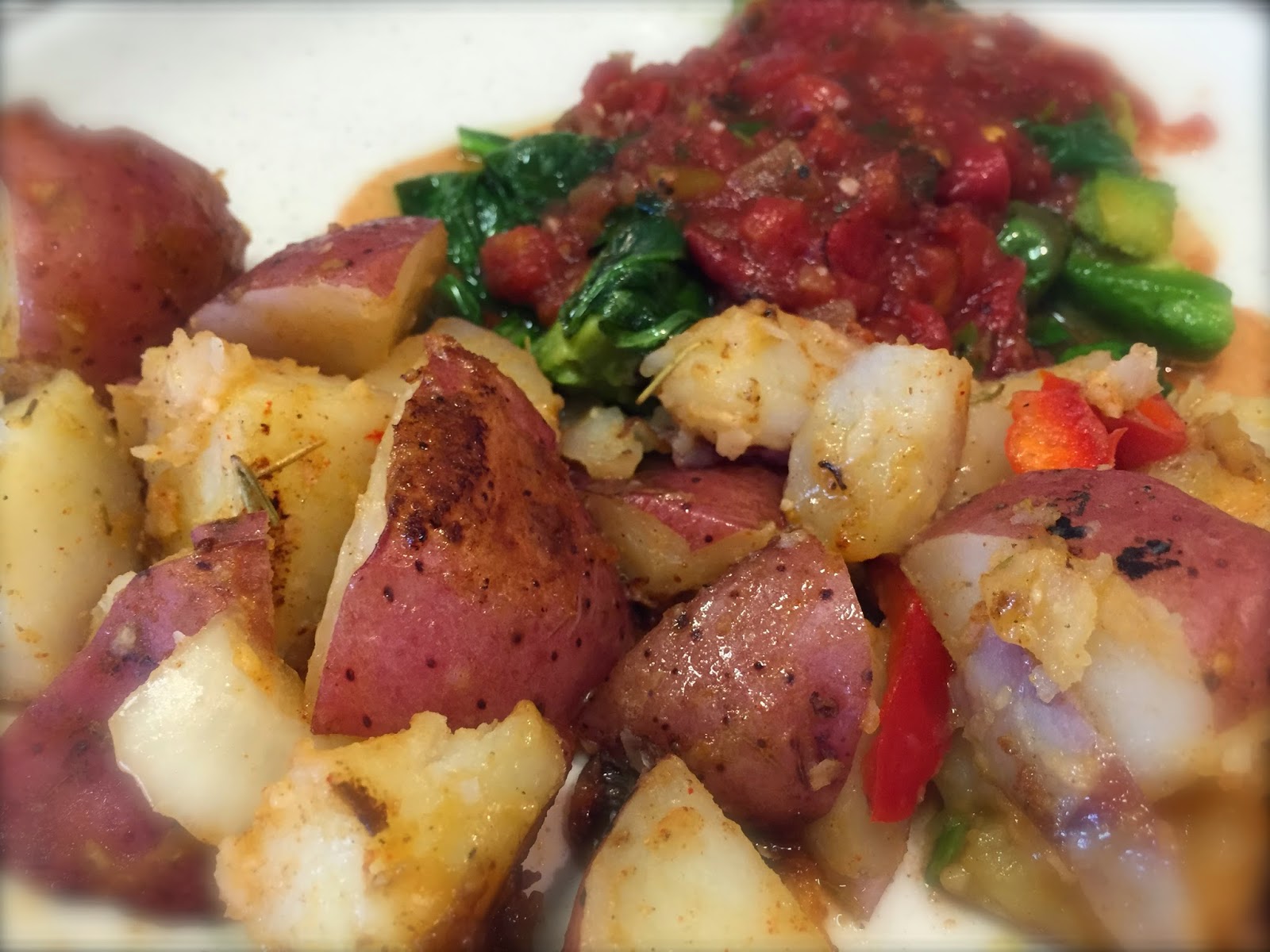 In honor of our dear old Lucy, who quietly passed on at home this week, after almost 13 years of happy snacking, today's ThrowBackThursday takes us back to one of her all time favorites, Sweet Potato Dog Treats. Maybe is was goodies like these that helped her live so long. Make some for your favorite pup, and enjoy the wonderful aroma in your kitchen while they bake. 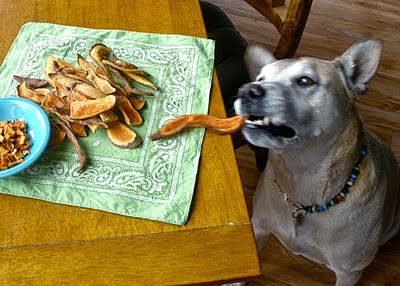 My New Vitamix, Peanut Butter, and The Best Darn Sandwiches Ever

I did it. I finally bought a Vitamix. I've been wanting one for several years, pretty much since the moment I went vegan. Everybody told me that every vegan must possess a Vitamix (or other high end, high speed blender.) I resisted. It's a big expense. I wanted to see how much I could do without one, and if you read back through the blog, you'll see I've done plenty. Certainly one can be vegan without a blender of any kind. Just as certainly, it's more fun and creative with one.

I bought a "regular" blender, and used it for a while. Then I bought a NutriBullet, which I had a lengthy love-hate relationship with. My blog post on the Bullet stirred a lot of conversation, and has more comments than any other post I've written. I'll have to go back over there once more and note that I finally decided to spring for the Vitamix. And, as many people told me would happen, I have a bit of reverse buyer's remorse, as in, Why didn't I do this sooner???

My bullet is going to live at my Dad's, so I can use it for simple things when I visit him, and my beloved food processor so far seems kind of redundant in the presence of the mighty Vitamix. I've tucked it away in a cabinet, just in case, but so far, the right tool for every job so far is my one and only new favorite "Barbie Dream Blender," the elegantly hulking Vitamix.

The other morning I was writing up a post for Eating Vegan In Portland, about PBJ's Grilled, up on 23rd. Talking up those miraculous peanut butter sandwiches, I found myself yearning for one right that very minute. I headed straight for my micro-kitchen to see how well the Vitamix makes peanut butter. I heard that it could. I've seen the videos. But I wasn't going to believe it until I tried it for myself. I filled 'er up about half full of peanuts, flipped the dials and switches, and moments later I had a vat of warm, fresh peanut butter. (Oh, heaven. Hand me a spoon.) Sandwiches were on the way, but not before I planned ahead to dinner and made peanut sauce too. It's the perfect way to "clean" all the peanut butter from the blender. By making a sauce, it was thinned down enough that it was easy to pour and scrape out nearly every last bit. And this way I only had to do the soapy cleanup once. Kind of brilliant, I think. 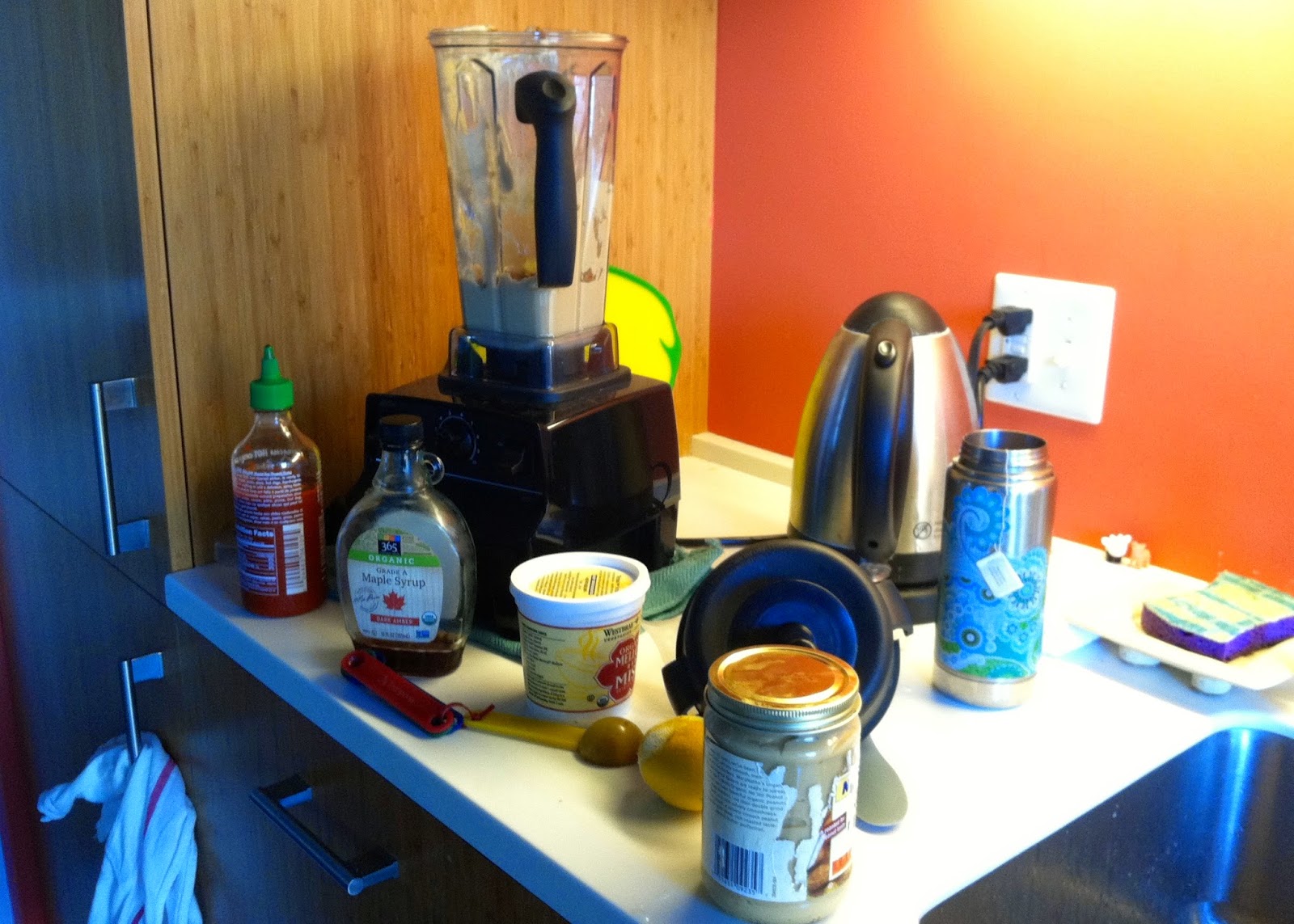 On to the next round - grilled PB and J's with... drumroll... caramelized onions, jalapeños, apples, and cranberries. Oh yes indeed. Inspired by my new favorite food cart, these delectables are hopping out of my ever-so-lightly-oiled skillet left and right these days. The first one I tried was peanut butter (store bought, but still good), apricot jam, grilled apples, fresh rosemary, lemon zest, and Daiya Cheddar. Swoon. 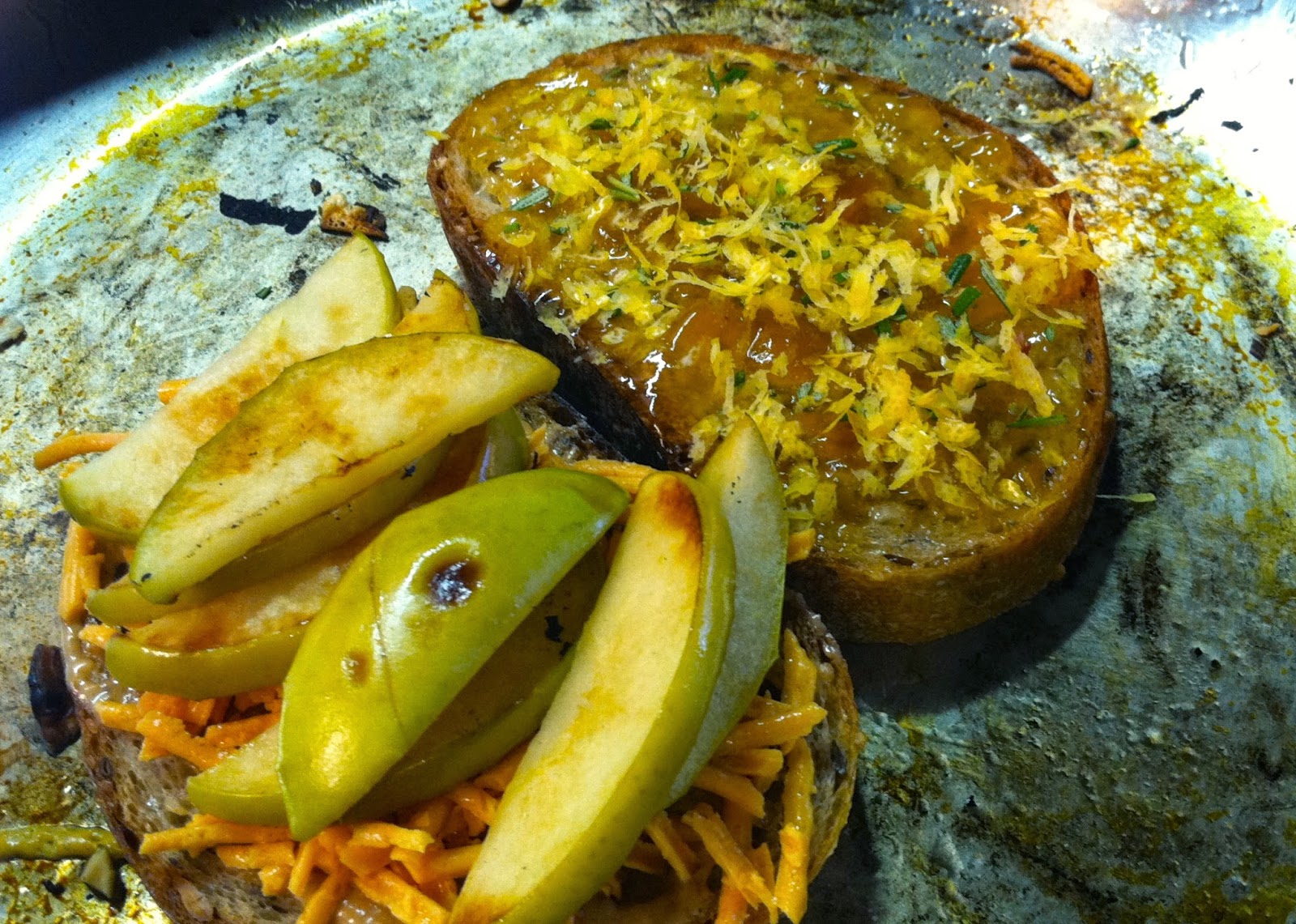 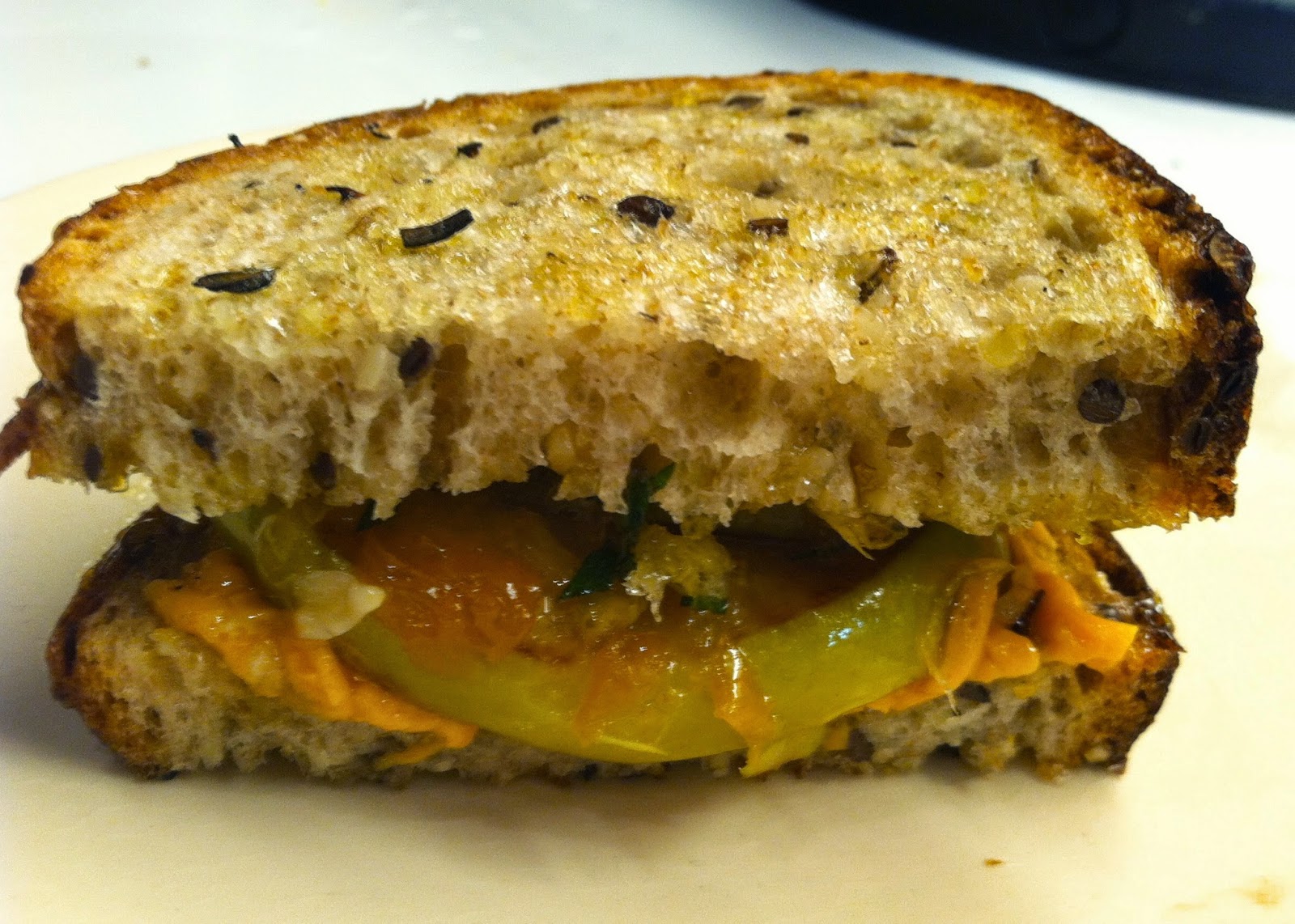 The original from the PBJ's food cart is PB, marmalade, fresh basil, Sriracha sauce, and curry powder. It's incredible. 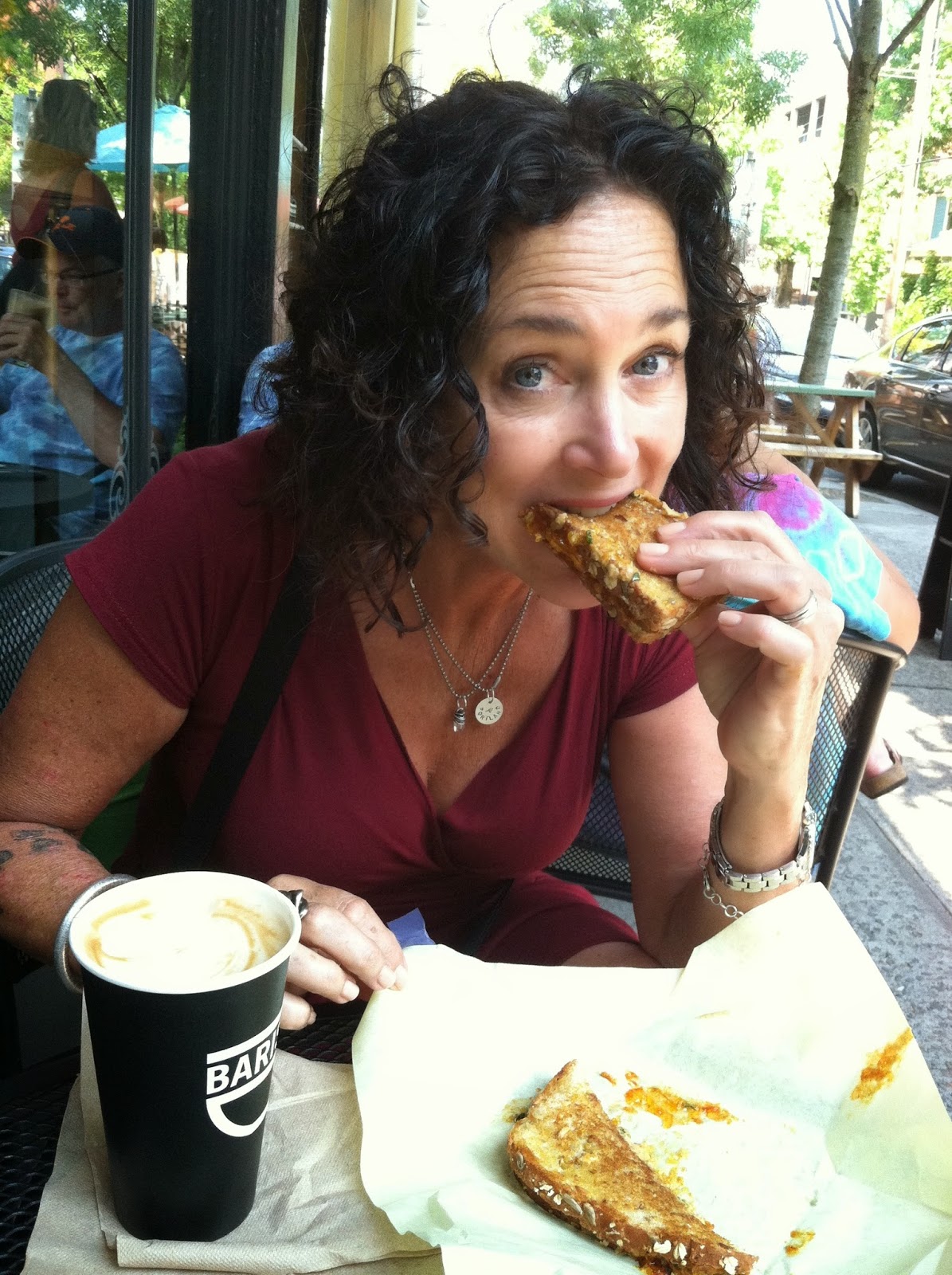 My mind is swimming with possibilities, and the experiment with caramelized onions was a great success. Do try this at home. 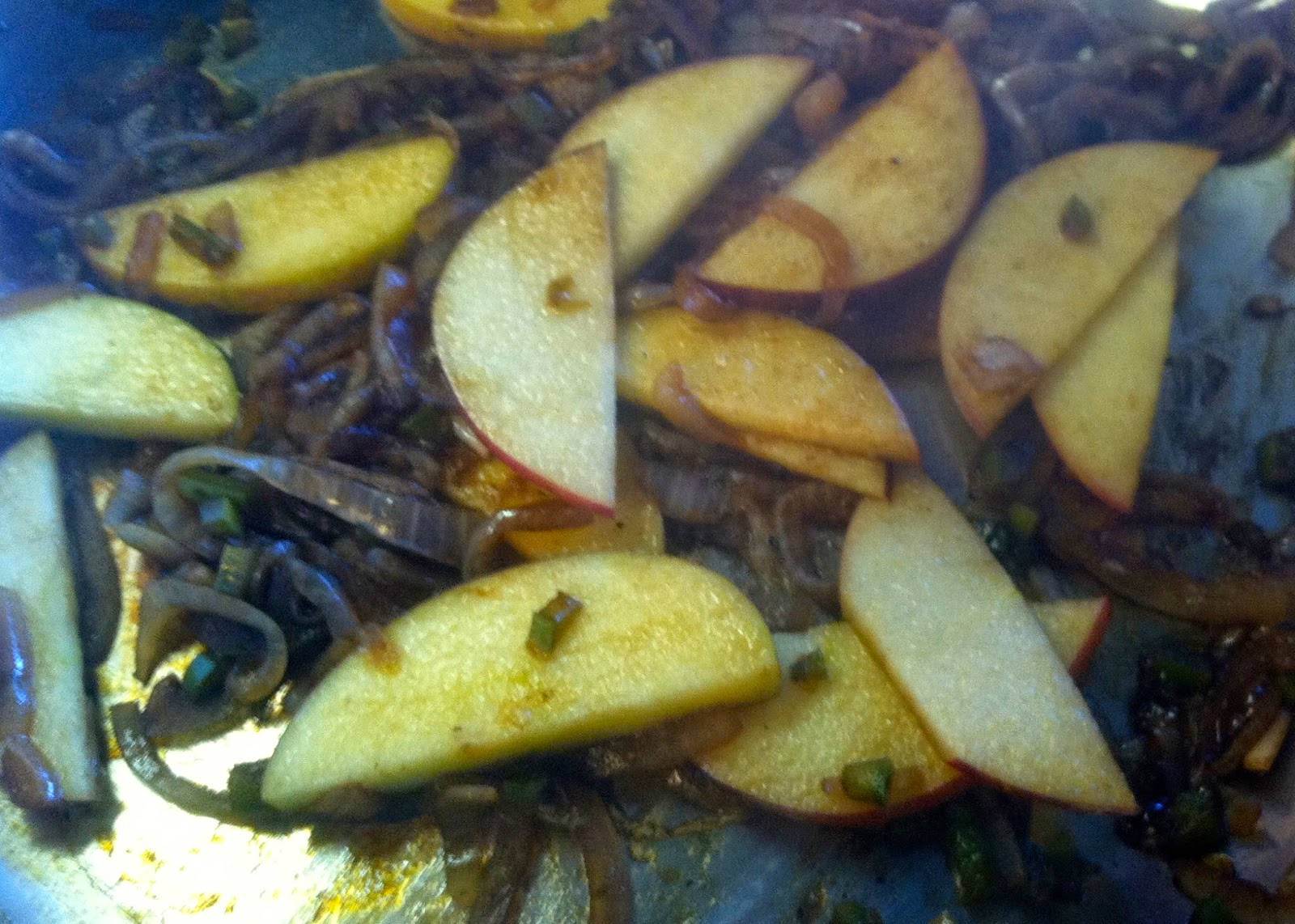 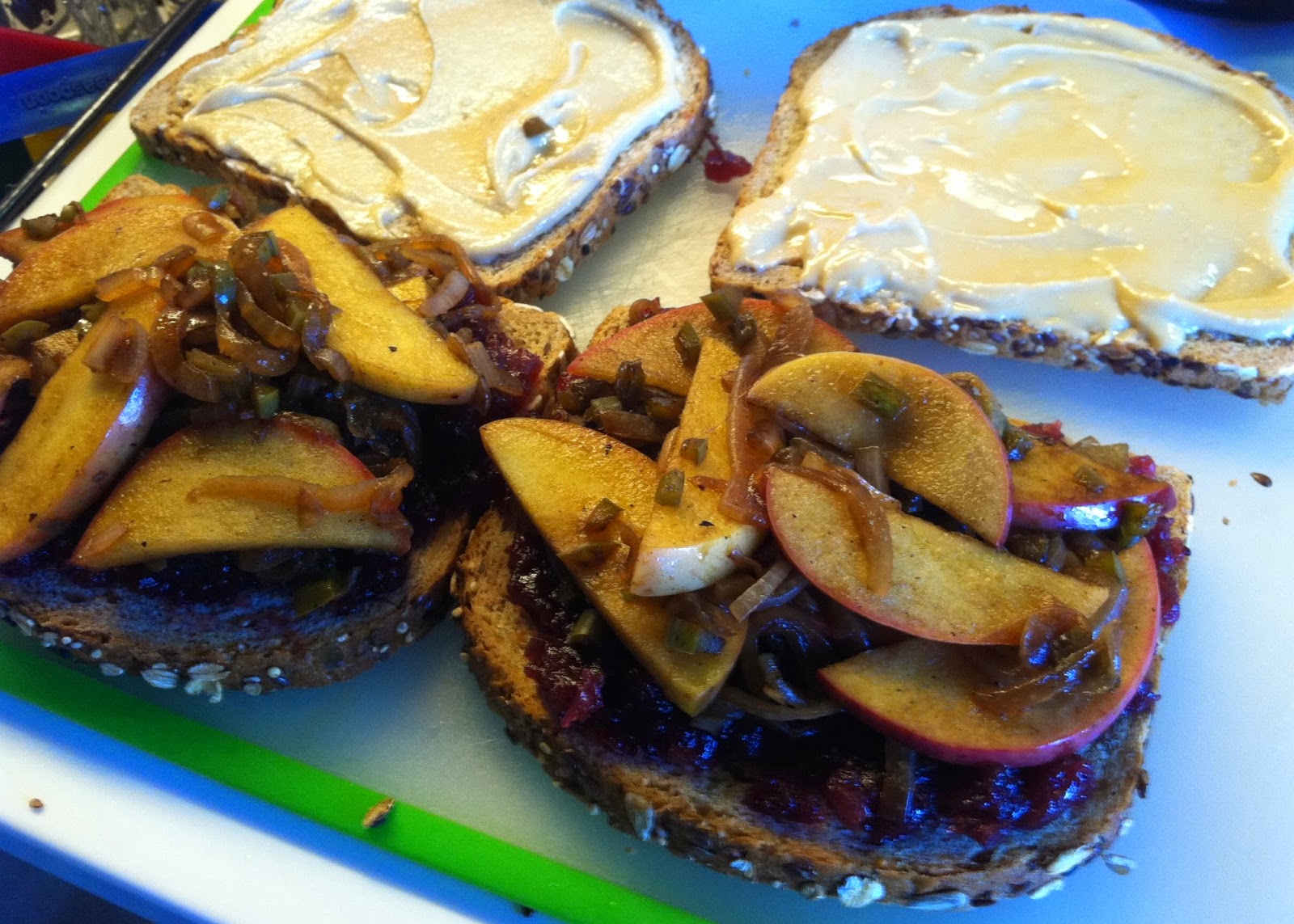 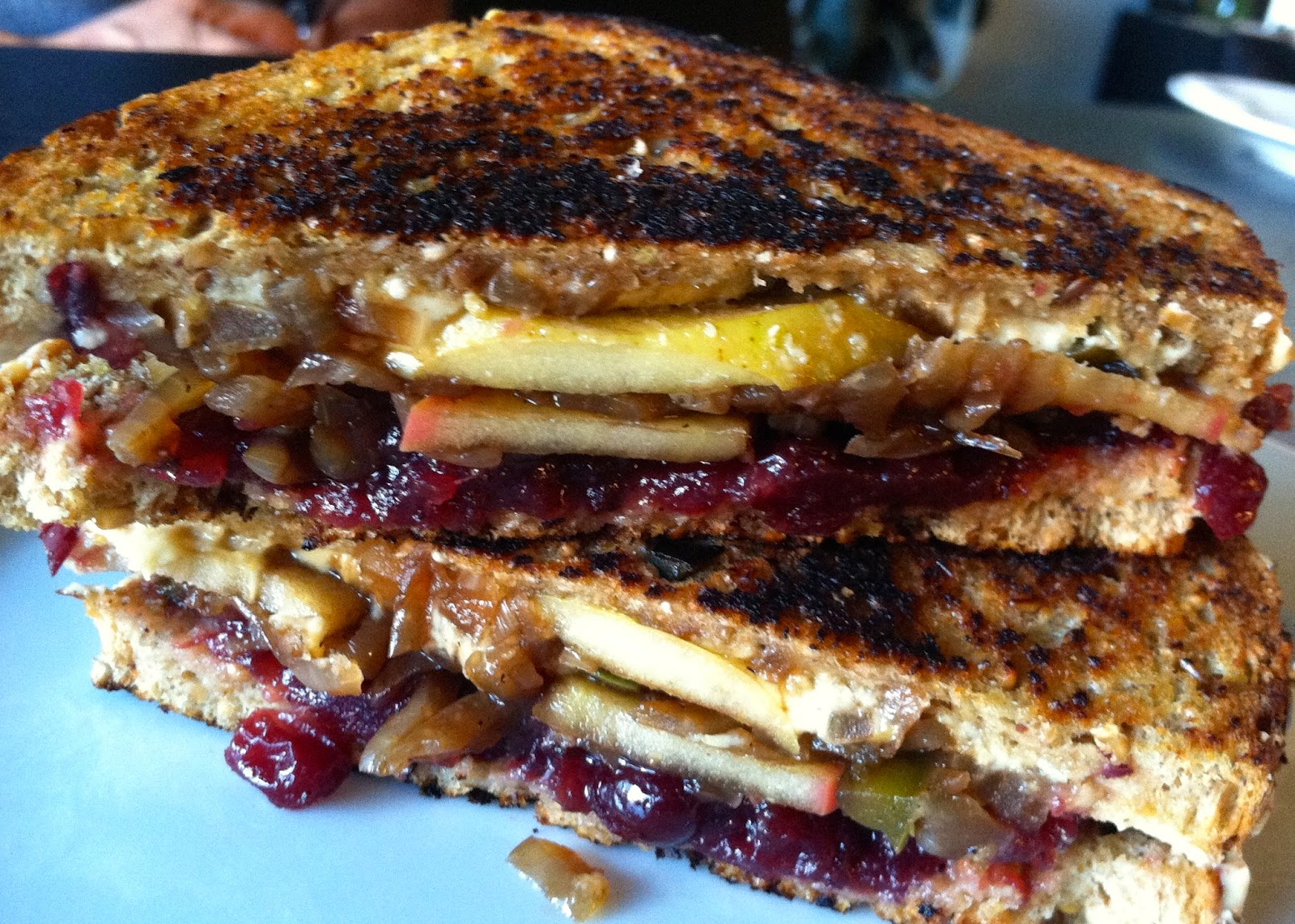 Peanut butter, from a Vitamix or from a jar, can be more magical than you ever imagined. And yes, having one powerful, versatile, wonderful machine is every bit as satisfying as I'd hoped it would be. Plus it allowed me to clear some counter space, which is a very big deal in a small kitchen.

Vegan isn't only for food. You knew that. All the stuff we use on the outside of our bodies has the potential to be vegan too, and often not. It makes sense to do the best we can when buying soaps, lotions, and potions, checking to see that the companies we support are using only non-animal products and don't do animal testing.

When a friend sent me a beautiful bar of soap from Bison Star Naturals, I fired off a quick email, asking the owner of the company if the products were vegan friendly. Her quick response assured me that yes indeed, these high-quality soaps are not only beautiful, but vegan and natural too. Happy me!

"... Yes, the soaps are vegan. I am currently working on making my stickers hold a lot more information including a full ingredient list. Following is my white lavender bars ingredients. All of my other bars are very similar with their own unique essential oils and plant material..." 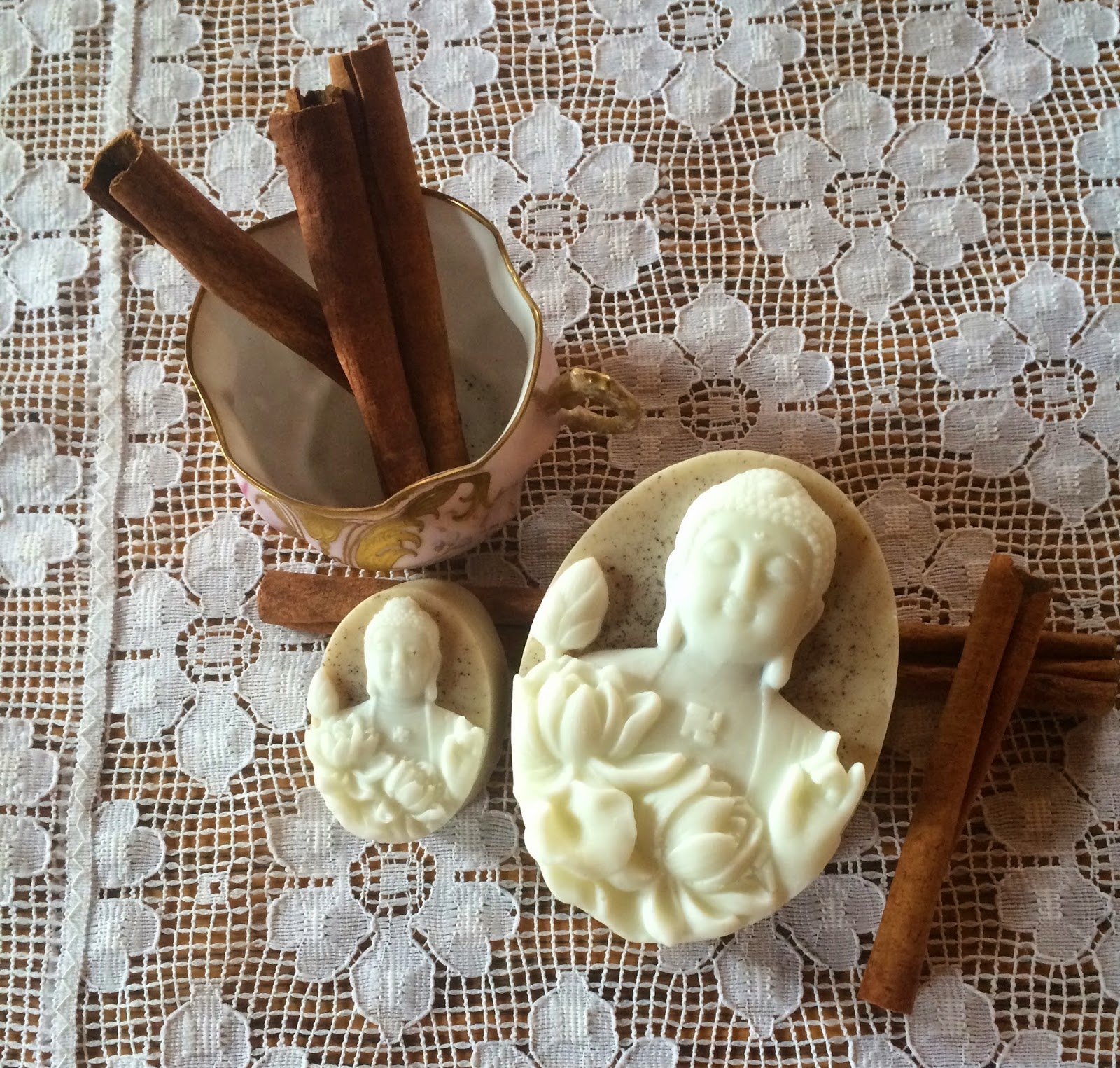 Bison star Naturals is a small, woman-owned, Taos-based company that is most worthy of our support. Head on over to their website and snap up something nice for your own sweet self, or to send as a thoughtful little gift, as my friend did. There are lots of styles and scents that are sure to please.
Posted by Kim Miles at 7:59 AM