This one has been a Recipe Box exclusive for a long time, but I'm sharing it with all of you now! I have only made this bread in Taos, at that crazy 7,000 ft. elevation. It worked great as written, but I don't know how it will do at sea level, or anywhere in between. You might have to experiment a bit, and I will too, once the weather cools down some and I can face the oven again.  Enjoy! 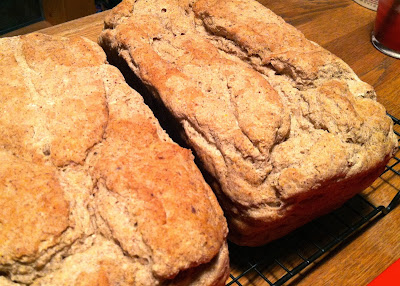 I've been making (and eating) bread for days, trying to perfect the vegan, gluten free recipe I posted back in March. It was good, but not good enough. It was also much too complicated and had too many different types of flour in it for me to bother with very often. So I've been tinkering with it, and followed a tip from a reader who suggested using an electric mixer. It worked! And it's worked consistently for four batches in a row. Keep in mind that your oven, elevation (I'm at 7,000 ft here), and even the weather can play big roles in your baking success. You might need to make adjustments. Or you might not!

Preheat the oven to 350º and oil two loaf pans.
Whisk the dry ingredients, including the yeast, together in a large mixing bowl.
Measure 2 cups of the water, and stir in the maple syrup and vinegar. Pour it into the dry ingredients, then add the remaining 4 cups of water.
Blend with an electric mixer on low speed for about a minute, scraping the sides of the bowl once or twice. Once everything is blended, continue to mix on medium speed for another 2-3 minutes. What you'll have is more of a batter than a dough. You won't be kneading it, but it will begin to thicken a little bit, and to become kind of stretchy and sticky. Don't add more flour!
Divide the batter between the two oiled loaf pans. Smooth the tops with a rubber spatula, then make a shallow slit down the center of each loaf with a sharp knife.
Immediately place the loaves into the preheated oven, where the yeast will quickly begin to activate and the bread will rise without any further help from you.

Bake at 350º for about 1 1/2 hours, or until a toothpick comes out clean from the center. Some days I've had to leave it in for closer to 2 hours.
Remove the loaves from the pans and onto a cooling rack. It's best to let them cool almost completely before slicing, but I know that's asking a lot. Do try to wait at least 15-20 minutes though.

Variation: For cinnamon-raisin bread, add 3 T cinnamon and 1 to 1 1/2 cups raisins to the batter.

TIP! A good bread knife is worth it's weight in vegan butter. Hacking through a soft bread with a regular knife will only mash it in the center. I've just bought this nice, inexpensive knife from Amazon and I love it. I can't believe it took me so long to get the right tool for the job! Look at how nicely the raisin bread is sliced.

Like this recipe? There are over 100 more in the Recipe Box!