Rick and I hosted a little party at our place on Christmas night. It was supposed to be simple, but of course I kept expanding the menu, and as always, ended up making way too much food. We made a huge pot of green coconut curry with vegetables and sticky brown rice, guacamole, spicy adobo chile-laced queso, garlic truffle popcorn, mini rum balls, and threw in some good spreads and bread from Trader Joe's.

The favorite nibble of the night though was the big platter of Thai Peanut Rolls, which were inspired by a killer peanut butter sandwich I had at a food cart. Make these for your New Year's Eve festivities, or for no special reason at all. They're a great little appetizer when sliced into rounds, and also good simply cut in half and munched for lunch. 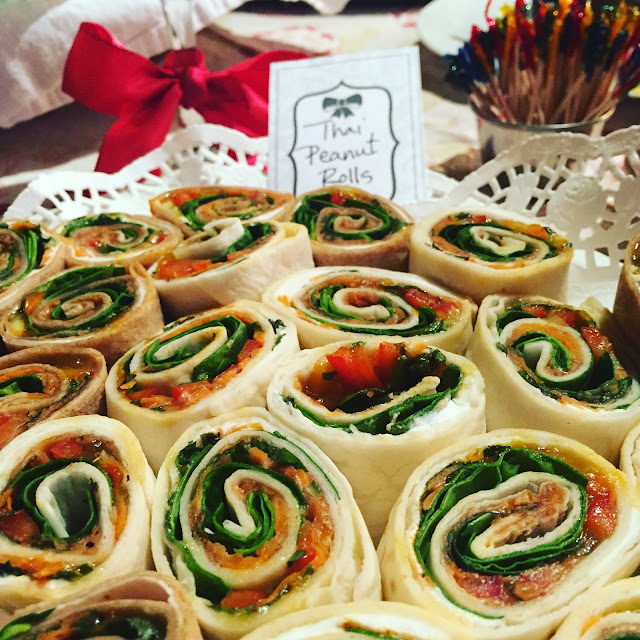 For each roll, spread cream cheese on about two thirds of a tortilla, going all the way to the edges. Spread a stripe of peanut butter, and one of marmalade onto the remaining third of the tortilla. Sprinkle basil over most of the spreads, leaving about two inches of the cream cheese bare. Add a thin layer of grated carrots over the basil. Drizzle lightly with Sriracha, and sprinkle with curry powder. Lay several bell pepper strips across the center of the tortilla. Top with a single layer of spinach leaves covering the half with the peanut butter on it. With the peanut butter end closest to you, roll it all up as tightly as you can, and let the plain cream cheese bit on the far side act as the glue to hold the roll together. Repeat the process to make as many rolls as you'll need. Slice them into bite-size rounds, and arrange on a platter. These don't really need a dipping sauce, but I like a little extra Sriracha on the side.
Posted by Kim Miles at 4:09 PM