I've been eating a lot of salads lately. It's part of my "training" for the half marathon I'm signed up to run in September. I used to be a big grain eater, but I've shifted over to mostly vegetables, with some fruit, some "pseudo grains", like quinoa and wild rice, and very little actual grain at all. I sort of miss my rice english muffins in the mornings, but I can live without them. It's very early in the training, but I'm acting "as if" until I actually look and feel and move more like an athlete.

I almost always have a smoothie for breakfast, and a big salad for lunch, so dinner can be kind of small. I ran across this Mexican Salad with Mole Dressing in a cookbook the other day, and thought it sounded sort of weird, and really good. It was definitely more good than weird, and I'll be adding this to my list of favorite salads. I changed it a bit, using vegetables I had, and added avocado and quinoa to the mix. It would be good with some nice organic tortilla chips crumbled on top like croutons. Find the original recipe in The 30 Minute Vegan by Mark Reinfeld and Jennifer Murray, page 146. If you don't already have this book, I really recommend it. (And, as always, I don't get anything from the author or Amazon if you buy it.) 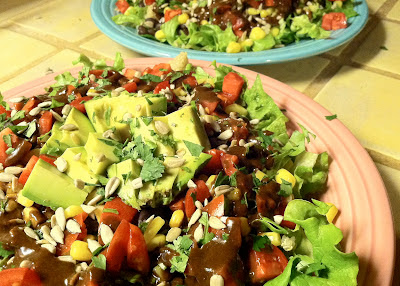 My husband loved this salad too. He's actually sort of a "mole fiend," and goes a little wild eyed with happiness whenever he can have his favorite sauce on just about anything, including salad. But the salad only got him started, and soon he was hinting about the possibility of some nice mole enchiladas for dinner. I resisted, but eventually caved in. Too much work, I thought, but what the heck. And as it turned out, it wasn't a lot of work at all.

I made the sauce early in the day, combining the salad dressing recipe with another recipe I found on No Meat Athlete for Vegan Chicken Mole. I used bits and pieces from both recipes, took out some oil, added more spice, and came up with a really delightful little mole, all the while keeping in mind that I wanted it to be simple to make, so I can whip some up whenever my sweetie has has a mole craving, and so you won't be too intimidated to try it! Sure, traditional moles are hugely labor intensive, and probably better in a lot of cases. But who wants to spend hours grinding spices by hand? Um, not me. Sometimes it's okay to make life easy. This mole looks like chocolate pudding, and tastes like I want to go off in a corner and be all alone with it... I don't think I'd use this one as a salad dressing, but it's great on enchiladas. 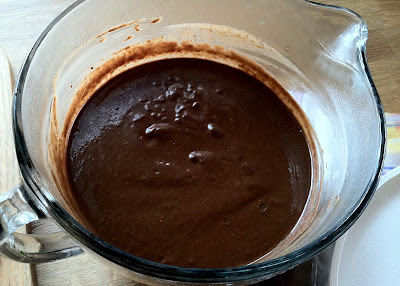 In your blender, place, but don't blend:
1/2 cup raw cashews
1 cup vegetable broth
The broth will soak the cashews for a few minutes while you add everything else.

Next add all of the following to the blender:
3/4 cup carob powder (carob is a legume, and contains protein)
2 tsp garlic powder
1 tsp onion powder
3 tsp cumin
1 1/2 tsp chipotle powder
2 tsp chili powder
1/2 tsp cinnamon
1 1/2 tsp sea salt
3 T agave syrup or nectar
1/4 cup olive oil
juice of 1 lime
1 can (14.5 oz) diced tomatoes (the tomatoes go on top to keep all the powders from "poofing" out the top of the blender)

Blend until very smooth. Pour as much as possible into a saucepan or bowl.
Add 1/2 cup water to the blender, put the lid on, and shake it up to loosen all the last bits of sauce. Stir the water/sauce into the rest of the sauce, and you won't waste a bit.

Use this mole on enchiladas, over tofu or tempeh, on steamed or stir fried vegetables, or on just about anything else you can think of. I made a pan full of layered enchiladas, with corn tortillas (organic, non-GMO, of course), baby spinach, grated zucchini, chopped walnuts, avocado slices, and Daiya pepperjack. Next time I think I'll go to the little bit of extra effort to roll the enchiladas, for a better ratio of tortilla to filling, and a prettier presentation. Everyone was happy with these though. What a tasty, exotic dish, that we've only had in restaurants before. This mole is a real breakthrough! 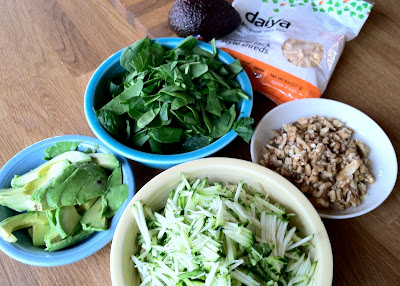 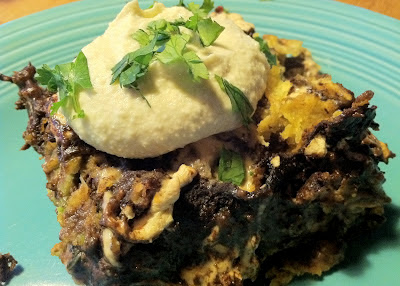 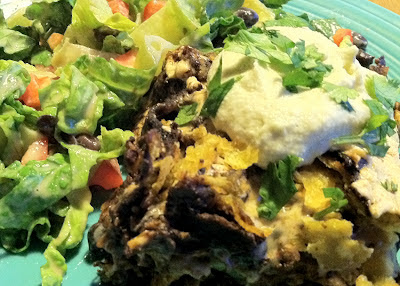