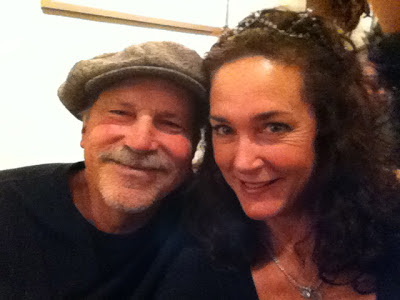 I want you to meet my husband, Rick. This slightly goofy picture was taken on New Year's Eve. I like it because it shows us looking shiny and healthy and ready for all the good things a new year has in store. As you know, I've been vegan for almost three years now. Rick has been along for the ride the whole time, although he was a little less enthusiastic than I was for a while. I jokingly told people he was "vegan between parties," which was pretty accurate. Cheese, of course, was the Naughty Temptress who would slink up to him at the hors d'oeuvres table and tug at his sleeve. He really didn't even try to resist, and I waited patiently for him to get it out of his system. We're talking about cheese here, not another woman for heaven-sakes.

Eventually my sweetie began to realize that the cheese he was sneaking at parties and at work was not making him feel very good... or very well either. Without being too pushy, I took whatever openings I could get to educate him on the perils of dairy, and the sad existence of factory farmed animals. He's an open-minded guy, so he paid attention, and eventually decided he was ready to go all-in. You can imagine my delight, having my Favorite Person finally on my team. Not only do I want him to live a long and healthy life with me, it really helps me to feel like I'm not the only vegan on the planet sometimes.

Rick is probably still not quite as dedicated as I am to the "vegan cause," but then that's not his style. I'm not exactly an activist, but I do get more caught up than he does in things I feel strongly about. So I won't be surprised (or scolding) if he doesn't ask if the wine is vegan in a restaurant, or doesn't mind that there's a squiggle of sour cream on his no-cheese enchiladas. The important thing is, he cares, he's paying attention, and he's talking to people about what he knows about the food industry, which makes me feel stronger and even more committed to my little mission to save the world. Rick will be showing up more and more here, so when I mention "we," now you'll know who I'm talking about.

Rick and I are both attending the VidaVeganCon Blogger's Conference in May of this year. He has a blog he rarely tends to, but he wants to get back to it, and he wants to make a difference in the world, same as I do, but maybe in a different way. And who knows - maybe he'll guest blog for me here now and then. I'd really like that, and I think you would too. Rick, Everybody, Everybody, Rick. It's time you all met.
Posted by Kim Miles at 7:16 AM