It was suggested that I carry out the beginnings of a theme this week, and proclaim today Witchy Wednesday, since it's October and all. What would I make? SandWitches, of course! I love the idea, but I'm not prepared for that today. Maybe next week. Today I have a treat for your dogs that's not at all tricky to make.

I'm not convinced that dogs can, or should, be vegans. They have the teeth, speed, killing power, and intestinal tract of a true carnivore. And while I know a lot of vegan humans insist that a dog can be perfectly happy and healthy on the right plant based diet, I think there might be a distinction between surviving and thriving. So I feed my dogs good quality "regular" dog food, even though it doesn't fit in with my own personal ethics.

I've noticed though, that more often than not, I'll find them under my feet in the kitchen. I knew they liked tomatoes and raw zucchini, but they've never shown much interest in other veggies. A couple of days ago, our big, lovely mutt Lucy wouldn't give up, so I tried an experiment. I gave her a bite of tomato. Yum! Then some carrot. Gone! Cauliflower. More please! Even red bell pepper was a hit. Little Heidi-the-Wiener-Dog came in to see what all this snacking was about, and sure enough, she snarfed all her veggies too. Huh. This was new. I began to wonder if my dogs were "catching" my vegan habits.

One of their favorite things is "bone time" in the evenings. Ever since Lucy was a puppy, we've given her rawhide "bones" to chew on. She was one of those super-chewy puppies, and these kept her from eating our shoes. As she got older though, even the biggest rawhide roll became a mere treat. She no longer chews them. She chomps them. No matter how big the bone, she devours it in 5 minutes or less. Heidi will chew hers for a little while and then get tired, so Lucy will steal the second one if we're not looking, and wolf it down like the wild thing she's descended from. I can't imagine that all that rawhide is good for her gut, and I know it's not good for the cows it comes from. So, since they seem to like vegetables so much these days, I decided to try something else.

I've seen sweet potato snacks in stores, and have read that they're really good for dogs, but they're expensive, so I've never bought them. I figured this was something I could easily make myself, so I did a little googling, and sure enough, recipes abound. Basically, you're just dehydrating slices of sweet potato. It takes a while, but it couldn't be simpler. 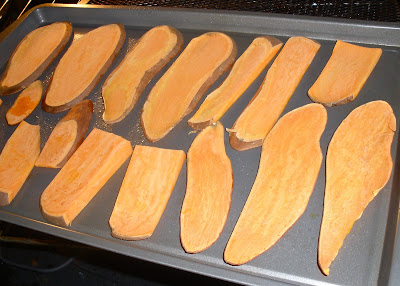 I got a couple of nice straight sweet potatoes, so they'd be easy to slice, and cut them into slices about 1/4 inch thick. I also cut a few into little bite sized pieces, so some are chews, and some are treats. (Well, to Lucy, it's all the same.) I placed the slices on a lightly oiled cookie sheet (one recipe I saw called for parchment, but this worked fine), and baked them at a 250º for 4 hours, turning them over half way through the baking time. Most recipes I read called for only 3 hours of baking, but they were much too soft at that point, especially for Lucy. Keep in mind that we're at a 7,000 ft. elevation here, and I imagine baking time would be different at sea level. Cook your taters accordingly. They were still kind of soft, but leathery when I took them out of the oven, and they toughened considerably as they cooled. The tiny pieces only needed about 2 hours of baking, so I took them out before the large ones.

It smelled like Thanksgiving in my house the whole time these were cooking, and the dogs seemed to know there was something good in their future. The taste test shows... they're a hit! 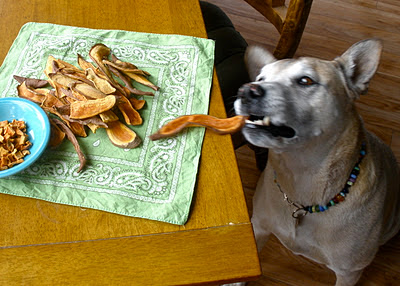