Every vegan has a Vitamix, right? It's kind of seen as standard equipment for anyone switching to a plant based diet. But not all of us actually have them. I've had a bad case of Vitamix Envy for a long time, but so far the Kitchen Appliance Fairy hasn't delivered, and with a $500 pricetag, I haven't been able to justify springing for one myself. Recently, after rave reviews from friends, I ordered a NutriBullet from Target. It's touted to be able to do a lot of the things Vitamix does, and at a fraction of the price, I thought it was worth a shot. (FYI, the Nutribullet was about $100 online at Target, with free shipping, and it's $150 everywhere else. Go figure.) 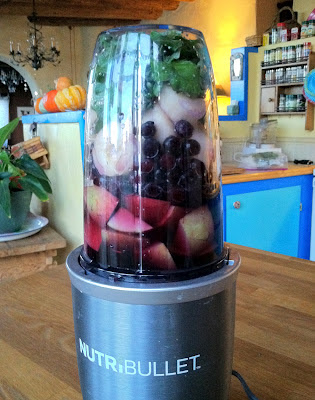 I'll start by saying that I like it. Like, but not love. It does what it does very well, but it doesn't do everything I had hoped it would. It makes absolutely magnificent smoothies, much smoother and creamier and frothier than my regular blender does. And because the container is rather small, it forces me to control the amount of goodness I throw in there. Now I make exactly enough smoothie for Rick and me to share in the morning, but not enough for the whole neighborhood. When I can make a vat of something, I generally do, and that's not always a good thing.

It's also really great for salad dressings, small batches of Almond Creamer, or anything else that has a lot of liquid in it. One thing I noticed though is you kind of have to put all the ingredients in all at once, and then blend it up. Because the cap and blades are on the bottom of the container, opening it to add ingredients can get really messy. But as long as I'm following a recipe, rather than inventing one, and don't need to do a lot of taste-testing, it works perfectly.

Another nice thing is that it's super easy to clean up. Since the cap-blade assembly doesn't come apart, all you have to do is fill the container with hot soapy water, buzz it up for a few seconds, and rinse it out. (It's dishwasher safe too, but that really means nothing to me. I haven't had a dishwasher in so long I'd probably just use it for storage if one magically appeared, which I hope it doesn't. I like playing in the bubbles.)

There are a couple of things NutriBullet doesn't do that I really hoped it would. I wanted to make nut butters, but so far I just get a mix of almost-butter and un-chopped nuts, even when using the special blade that should be able to handle the job. Forget about blending thick things like hummus or nut cheese. It just won't work. And I had some success with grinding brown rice into flour, but it wasn't as fine as I would have liked it. It worked alright for the crust of my latest apple pie, but made the topping kind of gritty.

Two other things to be aware of: The cap and container are very wide. I have big hands for a girl, but I have a hard time getting a grip on the cap to open it. I imagine someone with small hands, or with arthritis, would have a devil of a time getting to their smoothie. Also, I was not at all happy when twice now, the cap has come partially unscrewed during blending, and the contents leaked all over and made a huge mess. Screw it on tight, and then have someone there to help you open it.

I don't mean to sound like the NutriBullet is a terrible thing. It's not. In fact I actually really like it a lot for the things it does well. If you want to make amazing smoothies, this is your gadget. But don't expect miracles. The NutriBullet is a great little blender that doesn't cost a lot, and won't take up much counter space, but it will never grow up to be a Vitamix. I'll keep wishing for one of those.

UPDATE - 1-12-15
I finally killed my Bullet. One of the little lock-tabs inside broke, making it difficult to line the jar up with the motor and turn it on. I gave it to a young friend who may or may not have had the patience to limp along with it. I finally bought a Vitamix, and as you can read in my review, I wish I'd done it a long time ago.
Posted by Kim Miles at 3:40 AM