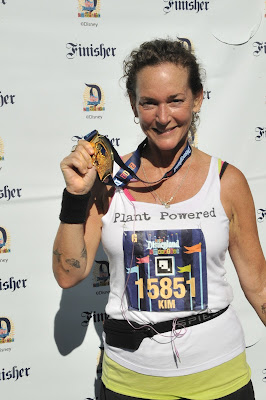 I did it! I ran my first half marathon on Sunday, and I have a feeling it won't be my last. I had a terrific time, and I did really well for a first-timer, finishing the race in 2:44:37. Overall, out of over 17,000 runners I placed 8083. Of the women I was 4364. In my age group I was 123. I'm pretty pleased. My training really paid off, and so did my diet. As far as I'm concerned, vegan running is the only way to go. I was passing younger, more fit looking people the whole way, and I'm convinced that the right fuel was a big part of that.

Training at 7,000 ft in elevation, here in Taos, NM, certainly helped too. I had every intention of sticking with my timed run/walk intervals, but the reality of the race was quite different than running on the dirt roads in my neighborhood. It was noisy out there, and fun and chaotic, and entertaining. I couldn't even hear my timer most of the time, or I'd hear someone else's and get mixed up. And, it was so crowded in the beginning, I found that I just wanted to keep running so I could find a little room to move. I ran almost all of the first 7 miles, and was never out of breath, thanks to the lower elevation. I finally decided I'd better take a little break, and walk for 3 or 4 minutes, but as I continued along, I realized that it was actually easier to run than to walk. I was smiling the whole way, but at that moment I laughed to myself and said, Hey, I'm a runner!

I have pictures for you, of course. 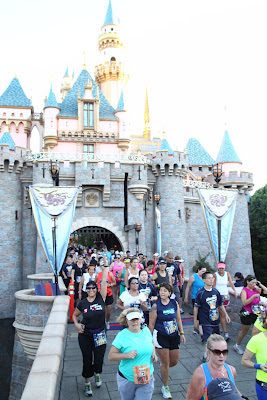 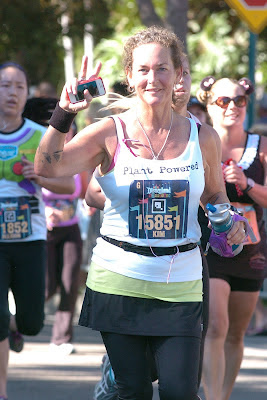 I bought the package of photos taken by the official race photographers, and if you look closely, you can find me in this one... 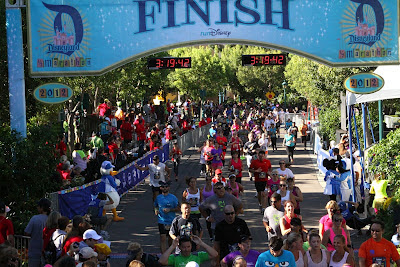 Lauren did great, as I knew she would. She started out a couple of "corrals" ahead of me, so she was able to get to a spot near the finish line where she could cheer me on. It helped! Here we are a little bit later, with our shiny new medals. 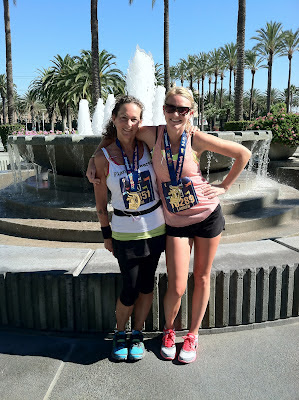 After resting up by the pool for a while, we were ready to play. We spent the evening in Disneyland, and most of the next day at California Adventure, wearing our medals the whole time. 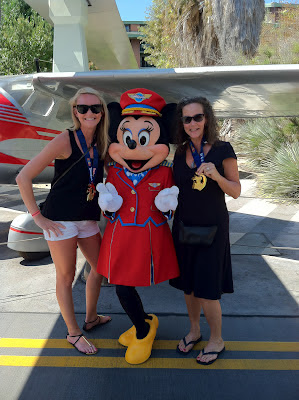 We were even able to find some decent vegan food, which I'll talk more about in another post. For now I'll just say that while Lauren is mostly vegetarian, she's not as obsessed with healthy diet as I am. She's young and healthy (and gorgeous), but I was the one with all the excess energy to burn. At one point she said to me, Mom, you have the energy of a seven year old at Christmas! I can't keep up with you! Think I'll keep eating my veggies. And running! Who wants to join me next year? It was a blast! 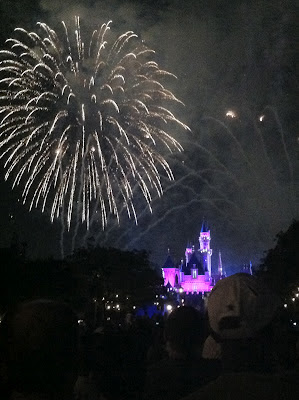