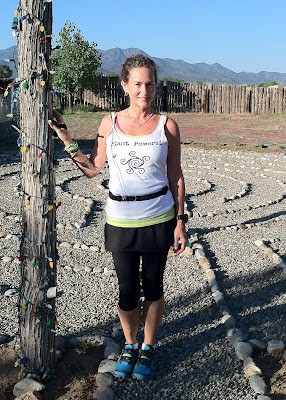 Here I go! I leave early tomorrow morning to catch my flight from Albuquerque to Anaheim. Next stop, Disneyland! If you're new here, the short catch-up is this: I've been training to run the Disneyland Half Marathon since February, when my daughter called out of the blue to tell me that she was going to run it. I hadn't done any consistent exercise in about 30 years, but for some reason I thought it would be a good idea to take on the half marathon challenge myself. There were times when I thought I'd truly lost my mind, and other times of deep discouragement when I thought I'd never make it. But here I am, 7 months later, 25 pounds lighter, and ready to run like the wind - or at least a nice gentle breeze - on Sunday.

I've been vegan all the way, and I'm absolutely sure I could never have done any of this on a typical American diet. I feel better than I've ever felt, even when I was younger. At 55, I'm younger than I was 10 years ago. And not at all coincidentally, 55 was the age when my mother died, overweight, and sick with cancer. Yes, I do have something to prove - that it's never too late to make positive changes in our lives, and that we don't have to surrender to getting old and fat and sick. Mom didn't know this, and neither did I until many years later. I'm running this race for Mom this weekend, as well as for my daughter, Lauren, and for me of course. This is one of the best things I've ever done for myself.

Since I'm a first time runner, I started myself in the last group. My runner number is 15851, and if you want to, you can check the runDisney Results page to see how I did. Of course I'll be back with a full report next week, but if you're my friend on Facebook, check my page for pictures during the weekend.