This is sort of a convoluted "recipe," but I'm presenting it this way so you can see how an idea sometimes evolves from dream-state to plate. I thought I was going to get to cook for a small group of vegans who are visiting the hotel Rick works for, and stuffed bell peppers were mentioned as something they wanted. I never really liked stuffed peppers as a kid, so haven't done much with them as an adult. It seemed like something worth trying, so I decided to sleep in it. A lot of times good ideas come to me on my sleep, and that's what happened here.

The dream-thought was red bell peppers stuffed with quinoa, apples, jalapenos, and toasted pine nuts, and topped with some kind of sauce... It still sounded good when I woke up, so I tried it with what I had on hand, which was not red bell peppers, but some lovely poblano peppers that needed to be used. I mixed the stuffing stuff in a bowl, packed it into the peppers, and baked them for about an hour. Then I made a creamy, cheesy sauce with white wine, and served it all up for dinner. 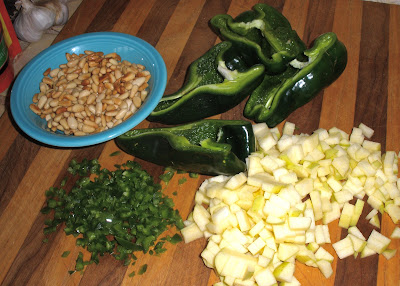 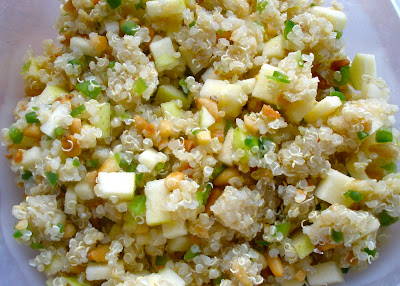 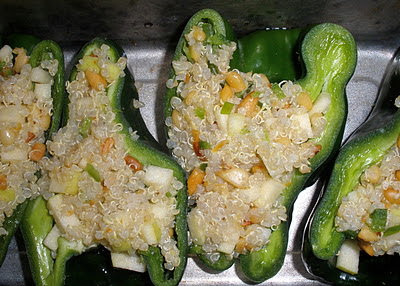 They were good, but to be honest, I wasn't thrilled. Just as when I was a kid, I felt that the ratio of pepper to stuffing was off. Too much pepper, and when they're baked, they stay kind of bitter, at least to me. Rick liked the dish, but I decided to take it a bit further. And the sauce was perfect, so I had a good place to start.

For round two (the next day), I bought some red bell peppers, cleaned them up, pressed them as flat as possible, and put them under the broiler for about 15 minutes, until they were nice and black. Then I put them in a paper bag for a while, until they were cool enough to handle. This steams the charred skins so they're easy to peel off. Ta-da! Homemade roasted red peppers! 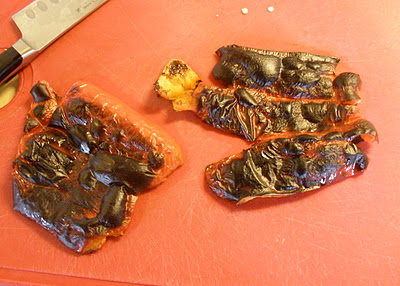 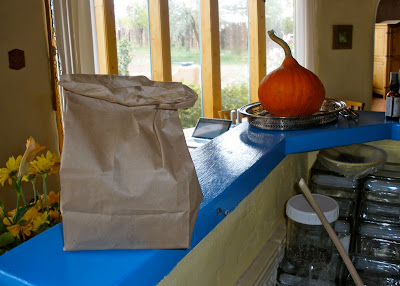 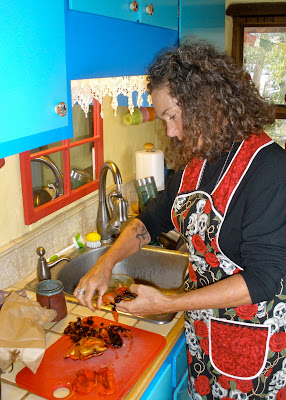 I had some of that good sauce left, so I just reheated it. Here's what was in it:

Blend everything in a food processor, and warm slowly in a saucepan.

I added some currants to the stuffing, because the apples didn't quite enough sweetness in contrast to the jalapenos. I steamed the stuffing for a couple of minutes, just to heat it up, then put it aside in a bowl while I steamed some kale for about 3 minutes (I like to sneak greens in wherever I can), and then the peppers, just to heat them up again.

I layered everything on the plates, stuffing at the bottom, then kale, then peppers, and poured the warmed sauce over the whole thing. Success! This was good. The currants weren't necessary, since the roasted peppers are a little bit sweet, and oh so smooth and tender. And next time I think I'll have some extra toasted pine nuts to sprinkle on top, for a little more crunch, and because they're pretty.

In my opinion, UnStuffed Peppers are the way to go. It was delicious, comforting, healthy, and beautiful to boot. Too bad I don't get to cook for the tour group. I have them to thank for inspiring this dish, and I'll bet they'd love it. 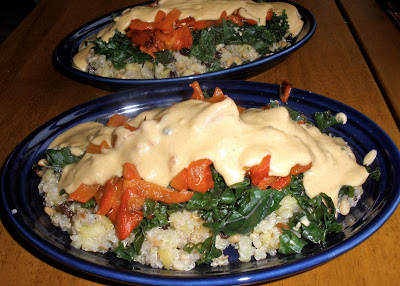