Another Thursday, another Long Run. Only a month till the race, which for those of you who are new here is the half marathon at Disneyland on Labor Day Weekend. I know, it sounds kind of wimpy to all the "real runners" out there, but considering it's my first race ever, and I was never any kind of runner or athlete of any kind before, and the little fact that I'm 55 years old... well, I think Disneyland is just the right choice. And the best part is, I'm running with my daughter. That's the cherry on top of the Coconut Bliss sundae.

I headed out just before 6:00 this morning, all decked out in the new shirt I had made for race day. It has my blog address on the back. I thought I might as well be my own billboard, rather than somebody else's. 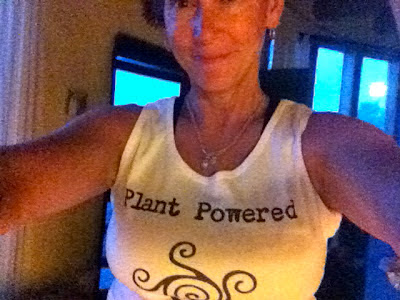 The hummingbirds were already buzzing my head as I stepped out the door, and the big full moon was still in the sky. It was the perfect Taos morning, nice and cool, and just right for running. 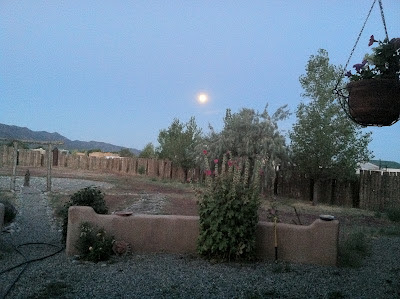 I tried a new version of the neighborhood loop I've been working with, and it went pretty well. There's no getting around the fact that there are way more hills around here than I need for this particular event. Sometime it feels more like I'm training for an ultra rather than a little old urban half marathon. But I'm hoping that because this is so darn hard sometimes, it's making me tougher than I'll actually need to be on race day.

A few hills aside, it's not all moonlight and hummingbirds though. Loose dogs are still a big issue. At mile 10, two snarly, mean ones ambushed me from under a fence, and scared the hell out of me. Fortunately they didn't bite me, but my stomach did a flip-flop, my insides turned to jelly, and after I was done yelling at the dogs, the owner (who was nowhere in sight, or probably earshot), and the neighborhood barbarians in general, I slumped into a walk and just cried for 5 minutes. Terror on top of exhaustion just don't mix well. I hate to do it, but I'm getting some kind of doggy deterrent spray. Enough of this.

After my little tantrum, I got back to my running pace of 2 minutes running to 30 seconds walking - the hardest pace I've attempted so far, and probably as hard as I'll go. I made it back home after 11.27 miles, and sat down and cried again. Yeah, I cried like a girl, and I'm OK with that. Sometimes we all need a little bath from the inside out.

Nobody said this was going to be easy. Nobody even said I was going to be able to do it. But after all the drama, I really believe I can do it, and I'm sure not going to give up at this point. I'm spending the rest of today drinking lots of water and coconut water, eating my beloved grains, greens, and beans, and perfecting the Power Cookies I plan to take along as fuel for the race. I'll have that recipe for you soon, along with some others I've been meaning to get to. Soon. Really soon. I promise.
Posted by Kim Miles at 10:00 AM